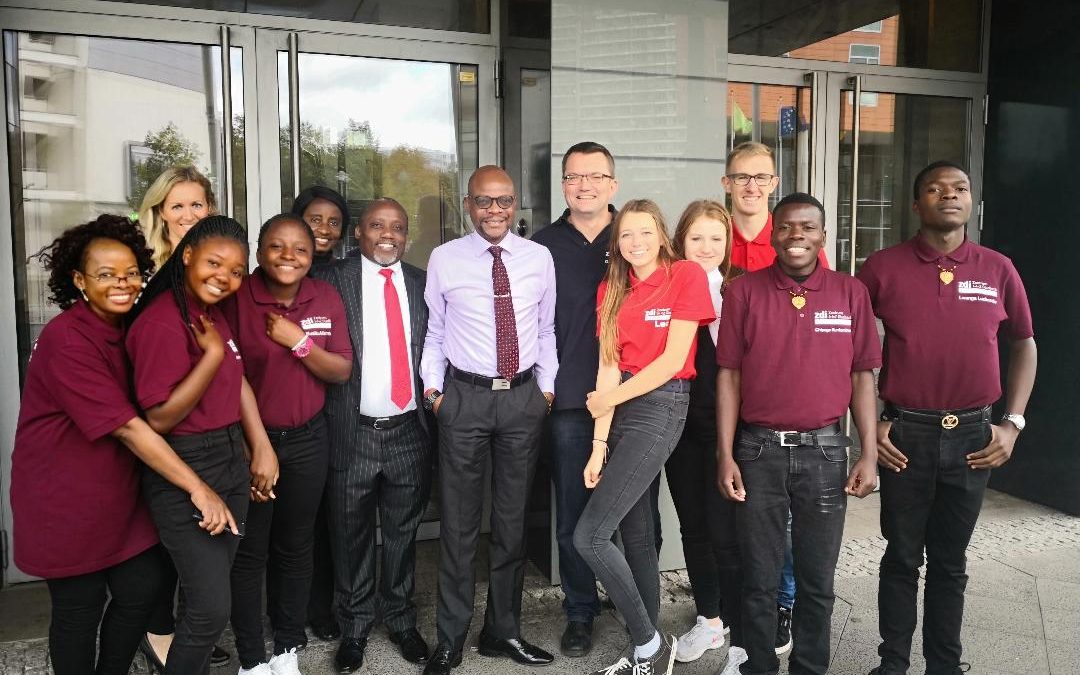 ……this is diplomacy at society level

Zambia’s ambassador to Germany His Excellency Anthony Mukwita has described the exchange program between Germany and Zambian secondary schools as an effective diplomatic initiative that brings closer the peoples of the two countries.

Ambassador Mukwita made the remarks this week when pupils from St. Marks Boys and Macha Girls secondary schools of Choma along with their teachers and counterparts from Gladbeck in Germany paid a courtesy call on him at his office.

“Your exchange program is a diplomatic exercise taking place at the very levels of society where people live”, Mr. Mukwita said.

“We practice diplomacy at an official level but you are doing it at the very level where the ultimate beneficiaries of diplomacy reside”, the Zambian envoy observed.

In their response to the ambassador’s remarks, the Zambian students in grade 11 expressed gratitude at the exposure the exchange program has had on their lives.

“I was in grade 8 when I first learnt about this program and determined from that day that one day I was going to come to Germany”, recalled Luchembe, a grade 11 pupil at St. marks.

“I love history and I have read so much about German history. And now that I am here and seen for myself, I will be in a position to effectively answer questions in history”, said Siusiku Mambo, a grade 11 pupil at Macha girls secondary school.

There were four Zambian pupils – 2 boys and 2 girls accompanied by their Deputy head teachers that called upon ambassador Mukwita. Each one of them was hosted by their German peers for two weeks and another two weeks, they were hosted by a different German student.

“After hosting Chipego for two weeks, I know at least one Tonga phrase, ‘muli buti (how are you)’”, said Lukas, a German student who hosted Chipego, a grade 11 pupil from St. Marks Boys Secondary school.

The delegation was led by Guntram Seippel who has visited Zambia several times over the years. “One of the things I love about Zambia is nshima”, he said in response to a question from ambassador Mukwita regarding some of things he has learnt about Zambia.

The partnership and exchange programs between the German and Zambian schools has been going on since 1985. Since then, over a hundred students have participated making the 2018 exchange the 33rd.

Over this period, the German partners have assisted both Macha Girls and St. Marks Secondary schools with resources to, among other things, power the schools with solar panels electrifying them throughout the day and night.

“Through these exchanges, two of the participants – a Zambian male pupil and a German female pupil eventually got married”, Mrs. Simona said amid laughter.