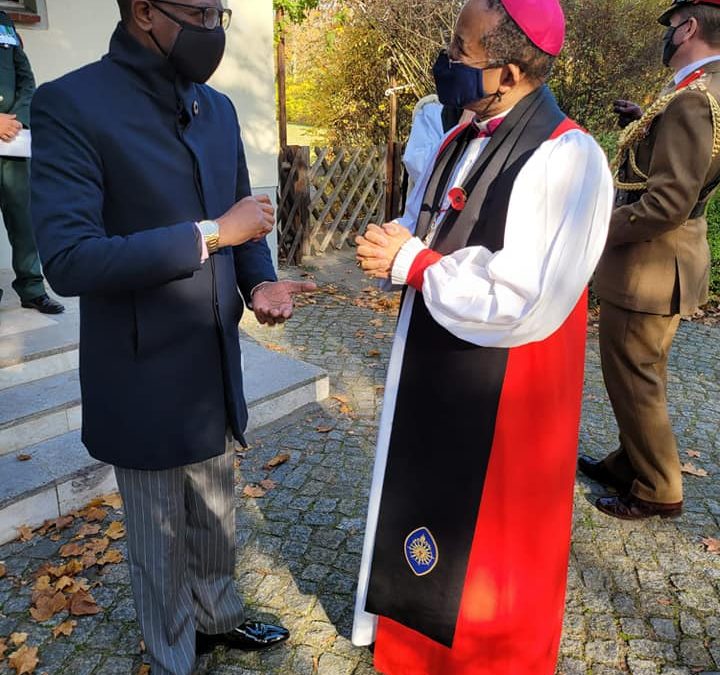 The best way to honor those that lost lives in world wars 1 and II is through the maintenance and sustenance of peace said Anglican Bishop Trevor Selwyn Mwamba during a diplomatic remembrance mass held at St George´s church in Berlin on Sunday.

The Berlin-based and Zambian-born clergy appealed to a gathering of the members of the diplomatic corps that braved a chilly autumn morning that peace was something the current generation must keep working on daily and guarded jealously.

“It is the best way to honour the fallen heroes that lost lives from across the globe in world wars of the past,” Bishop Mwamba said.

The retired clergy from Canterbury said, “every person is endowed by his or her creator with the capacity to undertake specific tasks that could contribute to a better life today and in the future of peace.”

Bishop Mwamba was speaking in the German capital Berlin during a sermon to mark the 75th World War II celebrations which were attended by, among others, Zambia’s Ambassador to Germany His Excellency Anthony Mukwita, spouse Elaine and Defense Attaché, Col. Sylvester Himwiinga along with the Indian Ambassador and other diplomats.

“Think of just being kind a simple concept, yet so very impactful. It can make the world a better place by ending suffering at the hands of war, hunger, human rights violations, and injustice. It has the power to drastically improve our own wellbeing as well as that of our families, friends, acquaintances, and strangers. The very act of expressing kindness to one another makes us more empathetic of other people’s hardships”, Bishop Mwamba said.

Quoting Matthew 5:9 in which Jesus Christ said “Blessed are the peacemakers for they will be called children of God,” Bishop Mwamba cited notable individuals such as the UN second Secretary General Dag Hammarskjold, a Swedish economist and diplomat who died in a plane crash on the 18th of September in 1961 in the then Northern Rhodesia now Zambia while pursuing a peace deal in Congo now the Democratic Republic of Congo or DRC.

He also cited John F. Kennedy, the 35th President of the United States who is widely credited with the prevention of a nuclear blood bath during the famous Cuban Missile Crisis in 1962 in which the then Soviet Union had been reported to have moved nuclear weapons into Cuba and stationed them just 145km from the US shores.

In this case, President Kennedy diffused the tension by peacefully courting his Soviet counterpart Nikita Khrushchev who, as a consequence, ordered a retreat and immediate removal of the missiles. Eminent carnage was avoided by the simple act of peace.

Bishop Mwamba said, “each one of us who seeks peace honors the memories of those who gave their lives in the wars that have been fought as this is their request to the present and future generations.”

Reflecting on the sermon, Ambassador Mukwita said those that have governed Zambia from the founding father Kenneth Kaunda to the present leader, President Edgar Lungu, must be commended for their pursuit of peace since the country’s independence 56years ago.

“The peace we enjoy today under President Lungu has been passed on from the founding father Dr Kenneth Kaunda and as a citizen of a great peaceful country like Zambia, we must continue guarding it jealously,” said Ambassador Mukwita.

Together with the Zambian people, Ambassador Mukwita said, President Lungu and others before him have managed to maintain the peace and stability the country continues to enjoy.

“As long as we can continue to pursue peace in all we do”, Ambassador Mukwita said “the blessings the Lord promised in Matthew 5:9, will always be ours”.

He also commended the African Union for the program “Silencing the Guns by 2020”, a continental effort to realize peace in Africa while ridding the continent of illegal weapons, a program that has and continues to score notable successes as more and more people voluntarily surrender weapons in an arms amnesty that has been declared in several countries, Zambia included under President Lungu.

This year’s WWII commemoration at St George was restricted to a small group of diplomats under the strict observance of COVID 19 rules following a partial shut-down of the country as the virus escalates in Europe’s largest economy.

Up to 75 million lives were lost during the wars including Zambian soldiers conscripted to fight side by side with British soldiers as a colony of the kingdom.