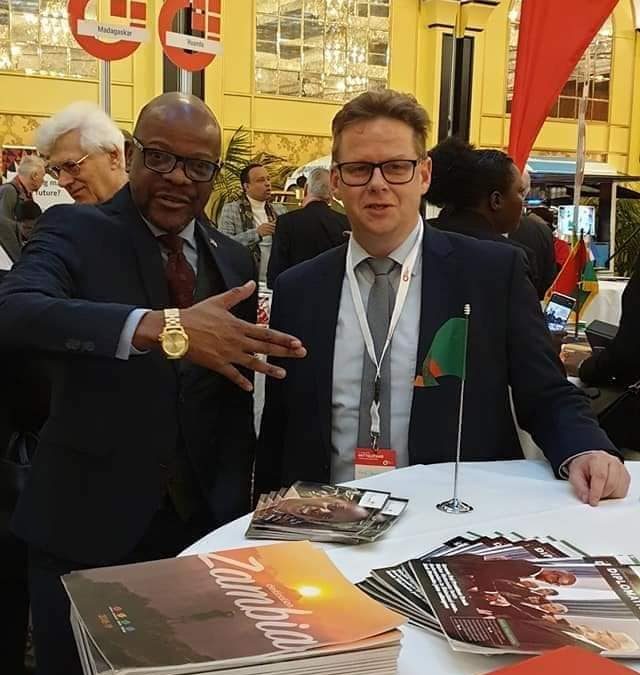 …its good news for Zambia says Ambassador Anthony Mukwita
29th January 2021 Berlin
Amatheon Agri Holding N.V. decision to issue a 20 million EURO convertible bond is good news because it will bouy the agro company to grow further in Zambia where it has created thousands of jobs said H.E Anthony Mukwita, the Zambian envoy to Zambia.
“The amount is about K519.2 million in our local currency and whether it is being raised for their other operations in other countries,” Ambassador Mukwita said, “whatever will be invested in Zambia shall be positively significant in our view.”
The issuance of what is called a “senior unsecured Convertible Bond” of up to EURO 20 million was announced in a statement Founder and CEO Carl Bruhn shared with Ambassador Mukwita this week.
Mr Bruhn said the issuance of the bond will help Amatheon in “strengthening its position in agribusiness and as food supplier in both local African and international markets by also adding value through state-of-the-art processing infrastructure.”
The ever growing company that already employs full time and casuals about 2,500 Zambians that actually pay taxes seeks to meet “an increasing global demand for healthy and organic superfood products through its Zambian operations and others that could be in Zimbabwe and Uganda it is calling Zuva (Zuba means sun in many bantu languages with others calling it Zuva) products. The Euronext listed agribusiness and farming group (ISIN NL0010273694, Symbol MLAAH), announces that it has successfully issued senior unsecured convertible bonds (the ”Bond”) in an aggregate principal amount of up to EUR 20 million.
The bonds have a denomination of EUR 50,000 (fifty thousand EURO), a coupon of 5% (five percent) per annum and an initial conversion price of EUR 0.10 per share.
Unless previously converted, redeemed, or repurchased and cancelled, the Bonds will be redeemed at their principal amount on 22 January 2025. Investors also have the possibility to convert the Bonds into new and/or existing no-par value ordinary registered shares of the Company.
The initial conversion price is set at EUR 0.10. The Convertible Bonds are listed on the non-regulated open market segment (Freiverkehr) of the Frankfurt Stock Exchange with ISIN DE000A286BY3 and Symbol (WKN) A286BY.
“This successful issuance allows the Company to further strengthen its operations and enhance its liquidity. “This Bond enables us to shape Amatheon’ s next growth phase towards premium food production and processing in Africa, and to enter top-quality marketing and trading activities”, says Mr Bruhn.
Amatheon has invested over EUR 100 million in its Zambian, Zimbabwe and Uganda operations thus far and remains one of the biggest employer of outgrowers with numbers currently standing at 4000 that could rise in coming years.
“We saw Amatheon recently introduce cayenne chillies and quinoa to its food line which is good for us because we understand the outgrowers are being paid fees related to the US dollar to avoid fluctuations in currencies,” Ambassador Mukwita said.
The company is currently building and installing modern infrastructure and production systems across its operations and manages an extensive portfolio of agriculture, retail and food processing activities, and has incrementally developed its projects in Zambia, Uganda and Zimbabwe by combining large-scale commercial farming with a large network of smallholder farmers.
They grow maize, soya, wheat and rice cultivated with value addition at their state-of-the-art processing infrastructure and keep growing following a growing global demand for natural and healthy food products.
Ambassador Mukwita said, the company “is good for our pursuit foe economic diplomacy because it shows companies in Germany and other parts of Europe that Zambia is a safe investment destination under President Edgar Lungu.”
The senior diplomat encouraged Zambians to invest in land and look for partners such as Amatheon because Zambians are bound to re-invest in Zambia much more than foreign companies. He described Mr Bruhn as a true friend of the embassy of Zambia as he keeps expanding and creating jobs.
Caption: Ambassador Anthony Mukwita with Carl Bruhn at a recent event in Berlin before the coronavirus pandemic.