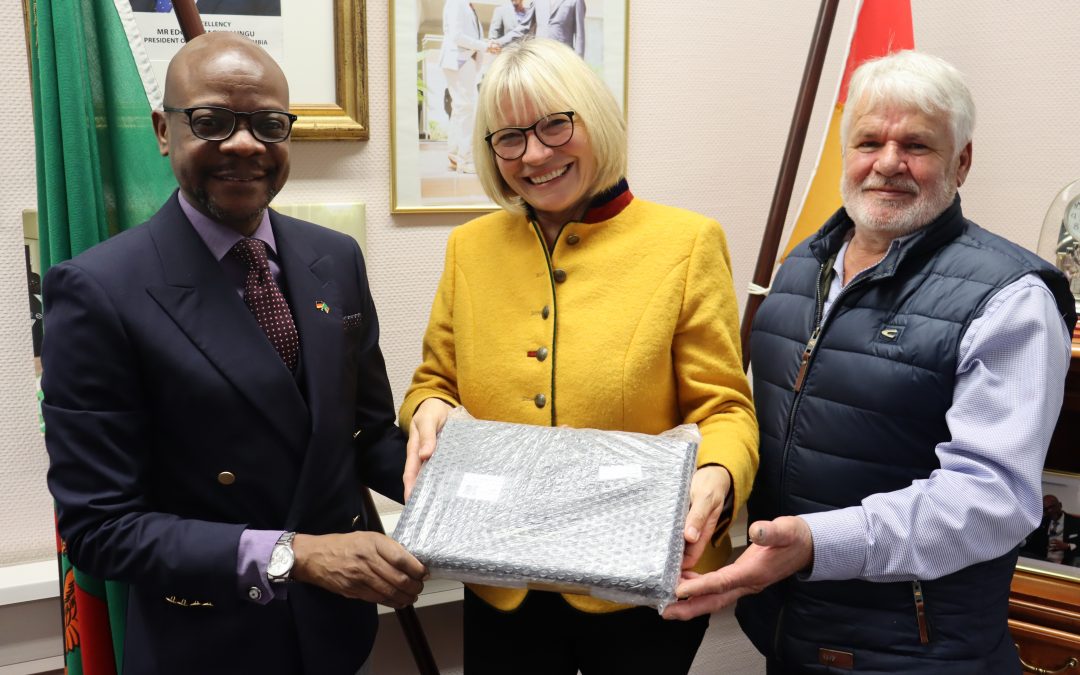 …for donating dozens of laptops for Zambian school

The embassy of Zambia in Germany shall continue to aspire to a development path that carries along as many people as possible especially in rural Zambia in line with President Edgar Chagwa Lungu´s mantra of “not leaving anyone behind,” said Ambassador Anthony Mukwita.

Ambassador Mukwita was speaking when he officially received a generous donation of laptops that will be given as a gift to some rural Zambian pupils from a family charity in Germany that has close work links with the embassy in Berlin.

The 21 laptops valued at several thousands of euros were donated by Mrs. Anita and husband Mr. Horst Bartsch, a German couple that has been doing charity work in Kaula and Loloma Secondary Schools located near Manyinga in the North Western Province of Zambia near the border with Angola.

“Your choice of the two schools located far away from urban centers where modern facilities are not to be found is significant for the Zambian government as the donation will help bridge the digital divide and afford rural-based young learners an opportunity to enjoy the benefits of the information age”, Ambassador Mukwita said.

The diplomat that hosted the couple in his office said the ease of access to information made possible by the computer technology means that the pupils at Kaula and Loloma could make up for the loss that is occasioned by the lack of textbooks but often accessed by urban pupils.

Mrs. Bartsch said the laptops are intended to prepare the pupils for tertiary education where computer literacy is necessary to undertake assignments.

Working with the Gosner Missionaries of Germany who have a presence in Zambia, Mrs. Bartsch and her husband who have retired from active work have developed an affinity for Zambian children some of whom they have been supporting to further tertiary education.

The Bartschs sourced the 21 laptops from a German company. The donation comes at a time when the government of President Lungu has embarked on deepening Internet penetration in the country by rolling out communication towers throughout the country.

Through the e-government division or Smart-Zambia Secretariat, the Zambian government is implementing a nationwide program that would ensure that public services are accessed through the Internet.

Consequently, just about every one of the country’s more than twenty government Ministries and public bodies now maintain functional websites while it taxes can now be paid online and electronic pay slips have replaced paper pay slips resulting in government saving millions in taxpayers’ monies.

Under the Ministry of Education, gradually, schools are being equipped with computers to facilitate the pupils’ access to the Internet while they also acquire computer skills.

Ambassador Mukwita called on more Germans to emulate the “good big hearts of Mr. and Mrs. Barsch and donate what they do not need to vulnerable groups that may need such equipment in Zambia as the rural development narrative continues.”

The Zambian embassy in Berlin has in the past organized a donation of a 40-foot container of medical equipment for the charity run by the First Lady Mrs. Esther Lungu, including a hospital in Nangoma.

“What may appear as useless here in the developed west could be very useful back home in Zambia hence the reason we appreciate good Samaritan work embarked upon by people like the Bartchs. God bless them”, Ambassador Mukwita said.