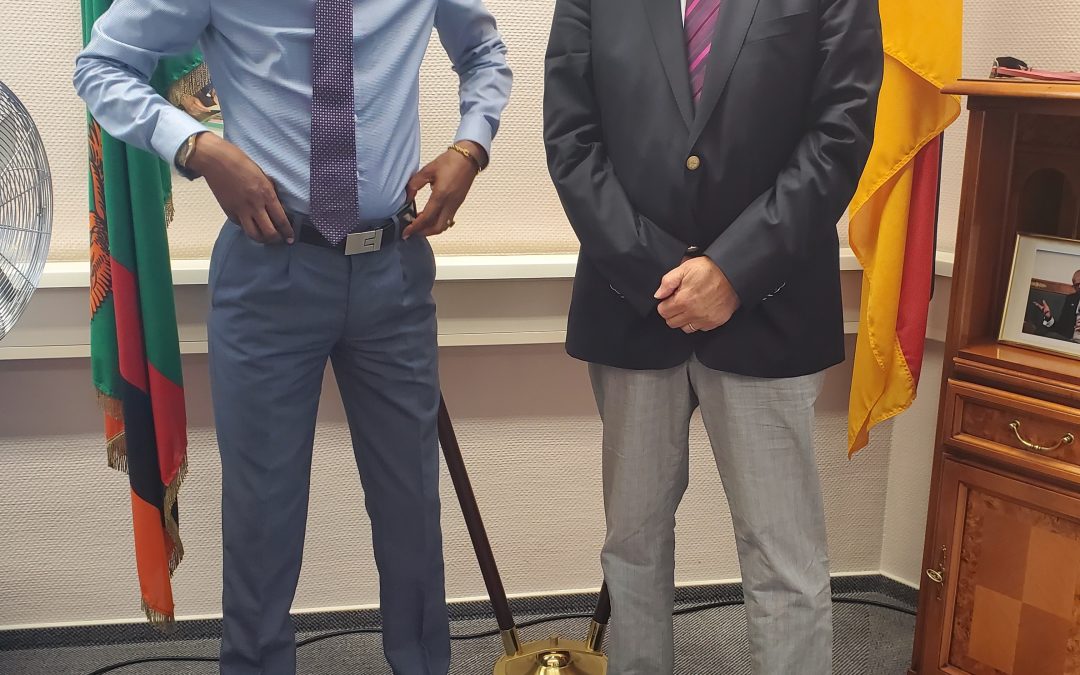 Zambia’s Ambassador to Germany, His Excellency Anthony Mukwita has lauded Honorary Consul Jorrit Plambeck for extending education to some 800 children at a school the German philanthropist is supporting in Zambia.

“Education has helped move people from poverty to prosperity in many societies in different parts of the world”, the senior diplomat said, adding, “This is why any contribution to the education of the Zambian child is an investment in poverty reduction”.

Ambassador Mukwita made the remarks when Honorary Consul Plambeck paid him a courtesy call at the Zambian Embassy located on Axel Springer Street, Berlin.

Mr. Plambeck, an international trade expert, has been supporting the education of 800 children at Maanu Mbwami Community School near Livingstone for several years by coordinating donations from German donors.

The donations have transformed the once-grass-thatched structure into a concrete building with more than four classroom blocks, toilets and accommodation for teachers along with a library which was set up with donations from the UK. The donations also help provide meals for pupils because Mr Plambeck believes therecannot be meaningful education on an empty stomach.

Mr. Plameck’s wife Heidrun heads the family’s efforts coordinating donations from German donors for the school project assisted by their daughter Janina whose roots in Africa are fairly deep as she was born in Zimbabwe.

“My wife has a big heart for African children that she fondly refers to as her children”, Mr. Plambeck said.

In the past, Mr. Plambeck has coordinated donations of computers to a school, a hospital and clothing meant for refugees living in camps close to the Zambia/Angola border.

He has been instrumental in Zambia’s continued participation at the international travel show, popularly known by its acronyms – ITB – that takes place annually in Berlin.