Bold decision to pay off 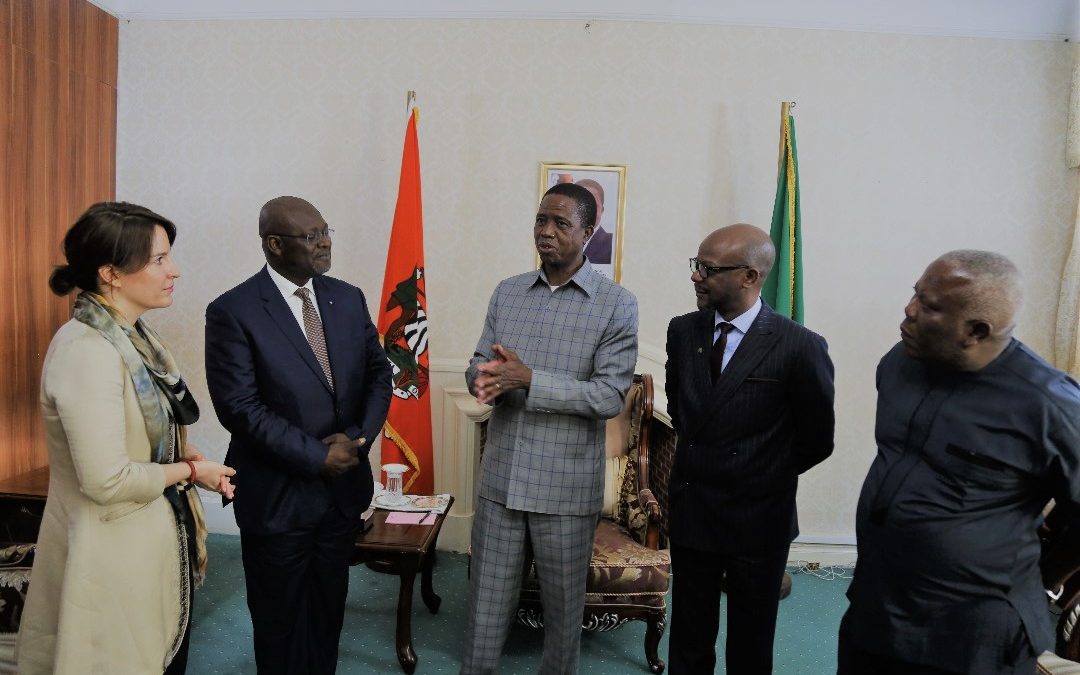 The Rockefeller Foundation that gives millions of dollars in grants for causes such as health, education and agriculture together with AfricaGreenCo, an influential energy off taker have hailed President Edgar Lungu for taking bold decisions that will grow the Zambian energy sector, contribute to job creation and reduce poverty.

The two organisations commended President Lungu when they met him during a high-level energy meeting at State House on 4th May 2018 attended by Presidential Affairs Minister Hon. Freedom Sikazwe and Zambia’s Ambassador to Germany Mr Anthony Mukwita.

This is contained in a statement by First Secretary for Press and Public Relations in Berlin Kellys Kaunda who was recapping the progress on the Ambassadors recent top-level working visit with the President in the first week of May.

“The President yet again was saluted for taking a first time ever bold decision to remove consumption subsidies in the energy sector,” Kaunda said. President Lungu is the first Head of State to make such a brave and bold decision and AfricaGreenCo and Rockefeller believe the decision requires special recognition.

Because of the decision to pull the plug off the expensive consumption subsidies, investors are now beating a path to Zambia making it a highly preferred destination.

Infact AfricaGreenCo that is seeking a partnership with the government of Zambia via ZESCO and IDC has already applied for up to $100 million for the Zambian energy sector.

The Rockefeller Foundation which gives organisations such as AfricaGreenCo grants told President Lungu that it is willing to support the Zambian leader’s initiative to grow the Zambian energy sector as a way of contributing to GDP growth.

“We have to bite the bullet sometimes to attain long term goals of poverty reduction for our people, as we were given these jobs to benefit our people not ourselves. So for us what matters is not popularity as much as progress,” said the Zambian leader.

Zambia’s Ambassador to Germany Anthony Mukwita who facilitated the high-level meeting via State House following his COP 23 engagement with AfricaGreenco last November expressed confidence progress in the energy sector is within reach.

“We thank President Lungu for taking time off his heavy schedule that includes meeting a myriad of Heads of State to meet AfricaGreenCo and Rockefeller people,” the senior diplomat said.

AfricaGreenCo, that has already held dozens of top-level meetings in Zambia, was represented by its Founder and CEO Ana Hadjuka while Mamadou Biteya, OBE (Order of the British Empire), represented the Rockefeller Foundation.

“We are greatly encouraged by the Presidential team at State House and the Ministry of Foreign Affairs for their response to calls for escalated economic diplomacy”, Ambassador Mukwita said.

Thousands of jobs are set to be created once AfricaGreenco has own offices as an off taker in Zambia, a country known in investment quarters for its peace, stability and strategic geographical location.

Zambia has an energy deficit of more than 1000 MW, which it needs to plug in to continue growing the economy in line with President Lungu’s aspirations.

The embassy of Zambia in Berlin has prioritised energy and agriculture as major areas of economic diplomatic escalation.