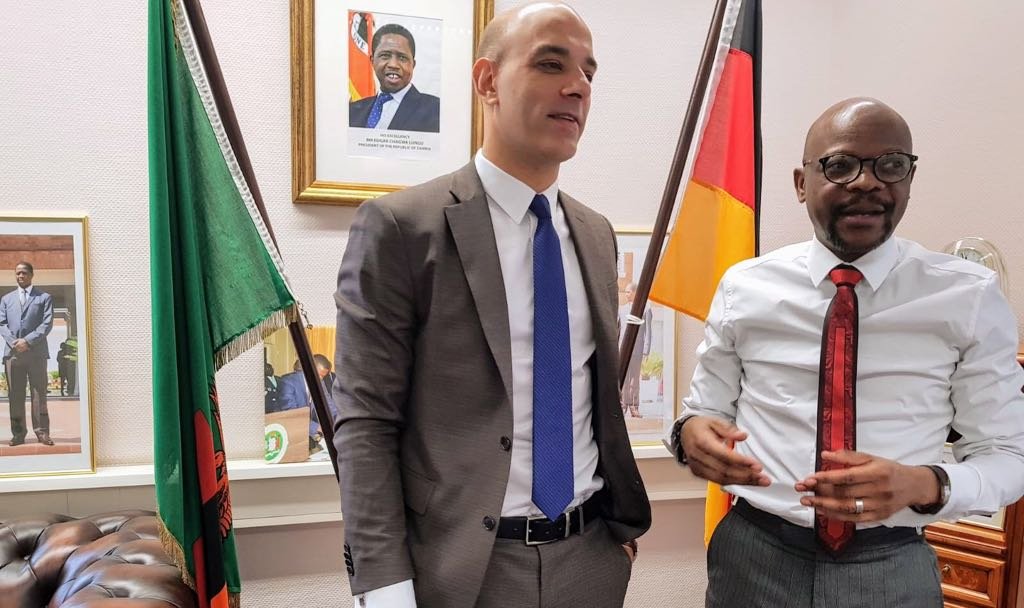 A viable railway line will play a pivotal role in complimenting the planned return of Zambia Airways said Bombardier head of rail for Africa Mr. Christian Bengtsson when he held meetings with Zambia’s Ambassador to Germany Mr. Anthony Mukwita this week.

“The new airline stands to be complemented in a big way by a functional and highly efficient railway line,” Mr. Bengtsson told Ambassador Mukwita, “government must invest in the revival of Zambia Railways for Zambia Airways to fully make a positive business mark as the country seeks to become southern Africa’s trade hub.”

Mr. Bengtsson also expressed concern that despite having signed an MoU for a Zambia Railways revitalization package, the deal has not moved forward since 2016 when Ambassador Mukwita first introduced the worlds largest train company to His Excellency President Edgar Lungu at State House.

This is according to a press statement released by First Secretary Press at the embassy of Zambia in Berlin Mr. Kells Kaunda.

Mr. Kaunda cited Ambassador Mukwita saying he would, “double up on the issue with the Minister of Finance hon Felix Mutati who has already discussed the revival of the dilapidated railway line with Bombardier top brass in Lusaka recently.

“I know that hon. Mutati is very interested in diversified financing and especially that which will come from the west because of the confidence it gives to the Zambian economy and the affordability of Bombardiers financing,”

Bombardier, which has transportation headquarters in Berlin, have carried out feasibility studies on the entire 900 kms of railway stretch in Zambia that runs from southern province to the northern border and have identified the following key areas for immediate attention:

·      Half of the 900km stretch must be rehabilitated or removed

·      Once railway is replaced and wagons purchased the company will be able to up cargo transportation from current 700,000 tons annually to

During a meeting with hon Mutati held last year with ambassador Mukwita and Bombardier top brass, the Finance Minister said, “I have a mandate from his Excellence President Edgar Lungu to boost GDP and I don’t think I can achieve that in the absence of a viable transport system such as a rail line and enough energy. That is why I want this railway discussion back on track.”

Ambassador Mukwita said Zambia’s central location in southern Africa positions it well to pay back whatever it may get from the Bombardier revitalization deal as connections with eight countries and a new airline buoys GDP. A study shows that jobs would increase at the railway company from the current 1000 to more than 5000.

Mr. Bengtsson stopped by the Axel-Springer office on a routine visit to his Berlin transportation headquarters. Bombardier, a Canadian company is the world’s leading manufacturer of both planes and trains. It has offices all over the world.