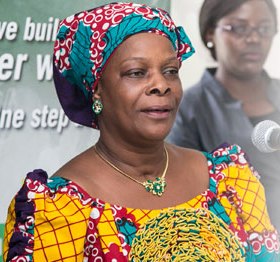 The forty-foot container of various medical equipment from Europe destined for the charity foundation run by the First Lady of Zambia Mrs Esther Lungu has arrived in Lusaka said Ambassador Anthony Mukwita.

The arrival of the container whose journey commenced in Vienna Austria under a collaboration of the embassy of Zambia and office of the Honorary Consul there commenced its journey on the high seas almost two months ago.

“We have spoken to the First Lady (Mrs Lungu) who witnessed the arrival and offloading of some of the equipment,” said Ambassador Mukwita, “she is grateful for the kind gesture and believes this will greatly benefit vulnerable Zambians she targets in rural areas.”

Ambassador Mukwita said the “priceless” donation is testimony that Mrs Lungu’s work is being appreciated not only locally but internationally too.

Among the donated goods are electric beds, safety health chairs, beds, feeding pumps, syringes and ultra sound machines including Centrifuges whose cost would normally run into  millions of kwachas.

Ambassador Mukwita said the donors,” our embassy collaborated with via our honorary consul Mr Heinz Messinger were more than happy to help because they appreciate how hard it can be to be engaged in charity work Mrs Lungu is involved if your support is lean.”

The First Lady told Ambassador Mukwita that there is no gift that is “too small” for her foundation because everything she receives fills a void that existed before the donation was made.

This is according to a statement issued by Kellys Kaunda, First Secretary Press and Public Relations at the embassy of Zambia in Berlin that also overseas Austria.

For the First Lady, the donation means 10 or twenty beds where there was none, a syringe,  a chair or an ultra sound machine where none existed in the past and she appreciates this.

The embassy in Berlin pledged to reach out to as many Good Samaritans as possible to help ease the burden the First Lady is carrying through her charity work for rural Zambians that sometimes cannot be reached via conventional government channels.

Ambassador Mukwita added that the First Lady’s foundation would soon receive a consignment of safe delivery kits to cut down the number of women dying while giving birth via a donation from the honorary consul of Zambia in Poland.

Mrs Lungu was lauded for breaking out of the State House ‘comfort zone’ to work among the poorest of the poor in rural Zambia, especially women, children and the disabled.