Germany is an all weather friend– Amb Mukwita 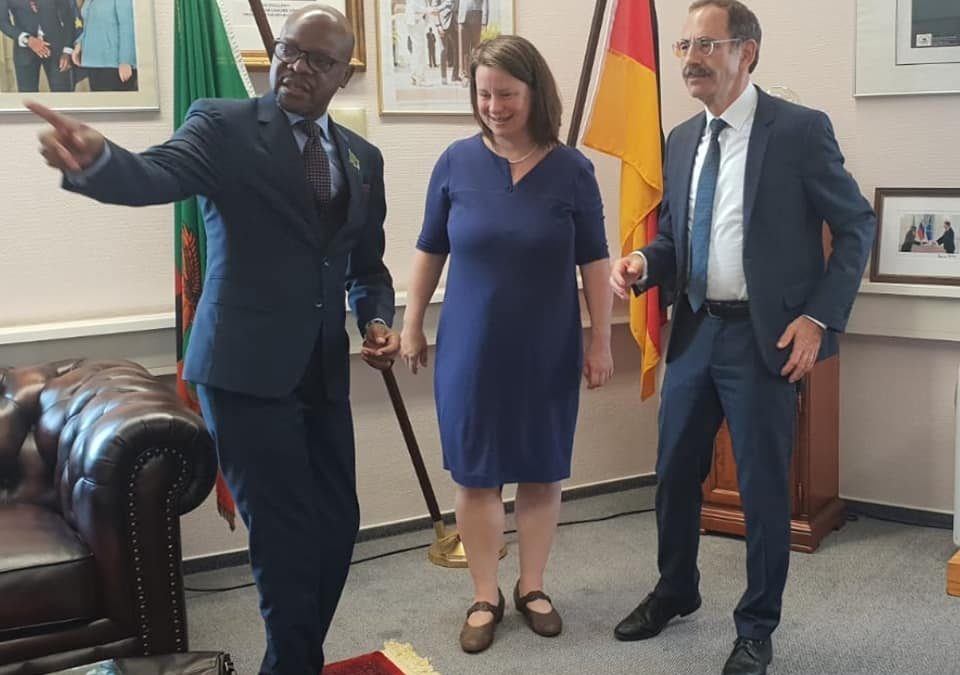 Zambia’s Ambassador to Germany, His Excellency Anthony Mukwita has described the German government as a true partner in national development during a scheduled meeting at the embassy in Berlin on Monday.

Ambassador Mukwita said the ‘regular consultations’ and interactions that continue to take place between German officials and the Zambian Embassy in Berlin indicate that the German government regards Zambia as an equal development partner as the two enhance economic diplomacy.

The Zambian envoy made the remarks in his office when BMZ head for southern Africa and Zambia Alois Schneider and Heik Poksein briefed him on the latest developments in the relations between the two countries ahead of their meeting scheduled for Lusaka in two months time.

“We appreciate your willingness to regularly engage and your frank views on the state of our relations”, Ambassador Mukwita said.

He said the regular consultations have and continue to facilitate improved relations and increased understanding of each others positions.

During recent consultations the German government expressed concern regarding the use of some of its development aid, especially in the water sector, an issue that has since been resolved.

To deepen the consultations, the representatives of the German government are expected, in the upcoming interactions to engage with selected Zambian government Ministries that are direct recipients of development support especially through Minister of Finance Dr. Bwalya Nga’ndu.

“This way, we hope to deepen our appreciation of the challenges involved in the implementation of our support to the Zambian people”, said Mr. Sneider, the German official responsible for Southern Africa.

It is not uncommon across the African continent for cooperating partners to take to the media to demonstrate their concerns or displeasure with governments receiving development support. In turn, some African governments have expressed disapproval of this approach to diplomatic relations instead calling for direct engagement.

Against this backdrop, Ambassador Mukwita has noted that German’s consultative approach might signal to others what ought to be standard operating procedure in relations between the developed and the developing world.

The Zambia/German relations date as far back as 1964 when Zambia gained her independence from Britain. Over the years, Zambia has received support in areas such as education, governance, health, education, access to clean drinking water and the administration of justice, among others amounting to about €1billion.