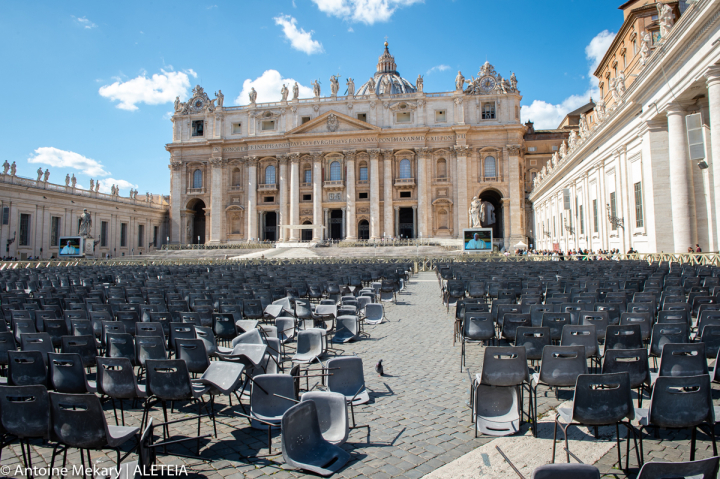 Three years ago I visited the Vatican for the first time over Easter with family.

The experience was ecclesiastical. I still can´t get over  standing in front of St Peters Basilica Square and listening to His Grace the Holly Father Pope Francis,  Jorge Mario Bergoglio preach. Holy man.

If you are Catholic like me, or even not, you can imagine my exhilaration and rise in religious juices.

I was in the presence (see picture Lubinda and Lushomo at St Basilica) of the ´holiest of holies´ in my religion kapish. Gods CEO on earth in my space…I felt blessed.

In other religions, after this pilgrimage, I would have returned back home to Stockholm with a prefix to my name. Definitely not St Anthony!

On Holy Thursday 2020, however, I followed a totally different mass that precedes Good Friday, Holly Saturday and sets the tone on how Easter Sunday would pun for the first time in 1000 years.

The Catholic church traces its roots 2000 years back, the oldest since records have been kept on earth.

It was conducted  online no congregants, just the Holy Father and maybe two cardinals.

The fact that the Holy Father conducted Easter grace behind camera for me didn’t even matter. It was the peg he chose for his 2020 message for his more than 1.2 billion followers globally that hit the spot-POVERTY.

“The same message my President H.E Edgar Lungu flagged during his national address on the same day on COVID 19-his anguish for Zambians adversely affected by the pandemic, I watched him live from Berlin.”

Pope Francis lamented the fact that only a few people have so much wealth on earth as the majority of Gods children suffer poverty and die needlessly, especially now.

“Why are people being housed in disused buildings when the hotels are empty?” the Pope mused.

He referenced the story of Mary of Bethany washing Jesus’ feet with expensive perfume as Judas complained that the perfume should have been sold and money donated to the poor.

Jesus knew Judas was a thief. He would have stolen that money anyhow and no poor person would have benefited if it came to that. Jesus concluded by saying “the poor shall always be here, but I won’t.”

The Pope said Jesus meant the poor shall live with us ´in him´ always.

John´s book explains it all. I am just a writer and diplomat I can´t extrapolate this beyond the basics but the point is ´don’t steal relief resources meant for COVID victims or the poor,´ said the Pope and President Lungu.

The Pope, however, popped a big issue. How COVID 19 has drawn a deep line in the sand between the rich and poor of the world from Berlin to Lusaka.

Never before have scholars seen the deep and ever-growing divide between the ´haves and the have nots´ thanks to the bug.

Suddenly, social parameters are being drawn because the bug has spared no one in its path regardless of class, gender, religion or political affiliation, kings, premiers and Presidents alike.

A Vox report ahead of Davos 2018 stated that the 26 richest people on earth had the same net worth as the poorest half of the world’s population of about 3.8 billion people (Mathews, 2019). That is huge.

Until today you had probably never heard of one David Geffen.

Geffen is described in media reports as an eccentric billionaire in trouble now for posting shots of his ´hibernation´ on the Grenadine seas aboard his half a billion-dollar super yacht, as thousands of poor people, die needlessly globally due to the COVID 19 as a consequence of scarce resources.

If you are in our beautiful country Zambia (the home of the Mosi o Tunya) a yacht is something you can’t fathom because, where do you even float such a ´boat,´?

You are talking about virtual Super 5-star hotels floating on the sea owned by one guy.

Bloomberg tracks 500 billionaires in a world population of about 7.8 billion people, only 500 own billions of dollars as the Pope lamented.

Not all billionaires splash their stupendous wealth in front of the eyes of poor people during times of need like now.

That’s why Geffen annoyed many commentators following his online brag as thousands die due to COVID 19.

You heard President Lungu sandbag those saying they would rather die from COVID than hunger.

Geffen´s posts, however, are good because they exposed for the first time since the bug snuffed out many lives, how the richest of the rich are having it easy as the poor globally die…as resource challenged countries try to save lives. It’s a wakeup call.

Geffen´s quote  ´backlashed´ when he said:

“Isolated in the Grenadines avoiding the virus . I hope everybody is staying safe.” He is worth about $7 billion.

Punditry that respect free expression don’t mind the braggadocio, not unique to Geffen, but to many rich folks that have moved into countryside mansions to avoid mingling with simple folk like you and I lest they die.

Back to Zambia and President Edgar Lungu

It was refreshing, however, yet again to watch our President Lungu spell out optimistic measures to immediately release money owed to road contractors and suppliers including pensioners in order to stimulate the economy.

President Lungu also showed exemplary leadership by acknowledging that the economy would take a knock as a consequence of the bug and urging the Central Bank to expedite measures to keep the economy running until the sun rises again.

The giant news agency DW on Thursday reported that reps of the 19 Eurozone countries would make available at least US$547 billion to stimulate the economy.

The heavy weights in the EU led by German and France are leaving no stone unturned against all odds, as our own President Lungu urges local commercial banks to lend money to local business at good rates.

In Ecuador, South America, the wrath of the bug has meant bodies of dead people are lying uncollected in homes and streets according to DW as Zambia continues to keep the numbers low.

In the United States minority groups are being hard hit debunking the theory. Africans liked to believe that Africans can’t be scathed by the bug.

Trevor Noah citing his researchers said the reason could be that minority groups or poor people have more pre-existing conditions in America and lack medical insurance thereby reducing it down to economics.

In Sweden its business as usual but then having lived in Sweden for three years I know that no one tells you about NO social distancing. It’s not just there.

In the house for about three weeks now, I was eventually compelled to take a drive around the neighbourhood with my little man Lush, but the response was affectionately harsh from spouse Elaine this time.  “bring that boy back home…President Lungu said stay home.”

I meekly drove back home, even when we were not going to enter a restaurant or grocery store because most are close anyhow. This tells you who wears the pants here. You only find out these things under lock down.

The worlds changed, Zambia is different now and shall never be the same. But I get comfort in Nobel Prize winner Toni Morrison´s wisdom.

Morison said, “ In times of dread, artists must never choose to remain silent”.

Perhaps it’s the reason I write, apart from just trying to stay sane under lockdown.

In a COVID time like now, another Morrisons quote reverberates, “This is precisely the time when artists go to work. There is no time for despair, no place for self-pity, no need for silence, no room for fear. We speak, we write, we do language. That is how civilizations heal.”

The writer Mr Anthony Mukwita is a published author, former Editor and current Ambassador to the Federal Republic of Germany. This article was first published on his widely followed Facebook page.