How COVID 19 silenced the busy streets of Berlin 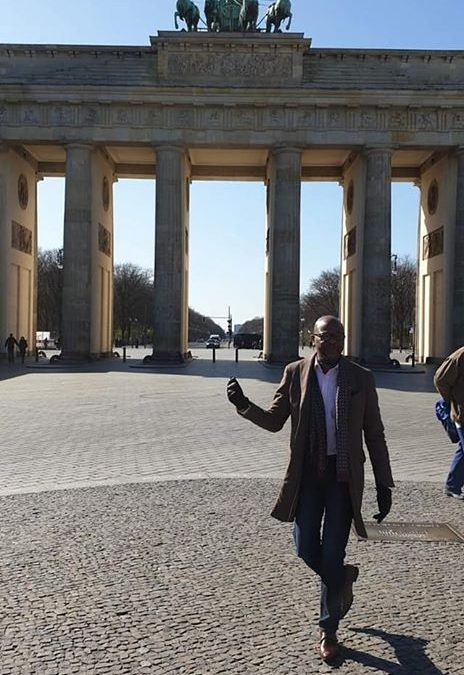 As a writer, I cannot resist the temptation to gather an audience around a bonfire and tell a good story in order to educate, entertain or inform whenever something extraordinary occurs.

Perhaps it is the overriding inner need to ensure I keep an accurate record of the history of the day in the form I recall or lived it so that those that were not around at the material time an incident occurred could learn too.

The story can be anything from a ´zero to hero´ to ´joy and pain,´ I can’t resist the  need to record history for posterity lest we forget.

It is for this reason that when I recently took a drive and walk around  the great historic city of Berlin, the sprawling capital of Germany on the heels of the coronavirus pandemic, the urge to merge my pen to paper returned all over again.

After all Berlin is home to the worlds most famous opera and philharmonic orchestra.

At the time of penning this personal narrative, I had lived in Berlin with my wife Elaine and kids for almost three years, we loved the bustling city that is full of life, without any doubt.

The fact that I love history apart from recording it made me feel a part of something greater happening when I first set foot on the soil of this marvelous capital of the wealthiest and most historic country in Europe.

I had walked and driven in major historic parts of Berlin starting from the Brandenburg Gate, Tiergaten, Victory Colum , Check point Charlie to the Berlin Wall and Holocaust Memorial behind the Hotel Adlon Kempski a thousand times  over three winters and three summers.

I always saw the same thing, whether it was winter freezing minus 1 degree or summer heating above 18 degrees in June: People from all over the world in their thousands milling around, enjoying the gift of life.

They pilgrimed into Berlin like clockwork annually to see this great city and sample its rich mixed history, its superior architectural structures, beautiful gardens, Curry Wurst and above all the  gute deutsche leute or good German people. The temperature never mattered.

Berlin to me is like the proverbial city that never sleeps, coming from Zambia where we learnt European history in high school as a prerequisite, being here, body and soul just notched up my intellectual adrenaline.

But today in the fourth week of March 2020 was totally different in smell, sight and colour from what I have known about Berlin and its almost four million citizens, almost the size population of Lusaka, our capital in Zambia.

Berlin was deserted,  the silence was palpable despite being a sunny Spring day, you could hear a pin drop and see the city from one end to the other without binoculars.

I knew the coronavirus that had affected the world as one of the worst public health hazards since Ebola and SARZ to mention but a few was bad.

But seeing its immediate devastating effects personally in the city I love firsthand as a writer was different.

Confirmed media reports on 22 March 2020 set the number confirmed deaths in Germany at 84 and rising while total infections stood at about 23 364 in almost all 16 states of the Bundesrepublic sending citizens in panic mode even though the leadership of Chancellor Angela Merkel appeared to be on top of things.

The virus spared no one its wrath path forcing even the Chancellor herself to quarantine and test on 22nd March 2020 and only cleared after she tested negative the next day.

She had already announced measures for all German residents to stay home and stay safe as the virus wreaked havoc on the worlds 4th largest economy too like everywhere else in the world.

Lufthansa, Germans largest plane company plus Delta grounded about 1,500 planes as more than 30, 000 jobs hang in balance ranging from the air line industry to the car manufacturers.

Remember Germany is the home to multibillion-dollar giant car manufacturers BMW, Daimler Mercedes Benz, Volkswagen and Audi to mention but a few while it is home to some of the biggest global banks such as DB or Deutche Bank.

I went Checkpoint Charlie (in picture), located on Friedrichstraße and Zimmerstraße, where many thrillers and spy novels, from James Bond starting from Octopussy to The Spy Who Came In from The Cold were shot on location, it was empty.

Checkpoint Charlie never runs out of people throughout the year from all over the globe, rain or shine.

The barrier and checkpoint booth, the flag and the sandbags are all based on the original site – they are popular subjects for photos.

Checkpoint Charlie is one of the Berlin sights that thousands of tourists visit annually from around the world according to their media kit and my personal experience.

It is a huge tourism magnate, a trip to Berlin without it, is as incomplete as a trip to Livingstone, Zambia without the Mosi-o-Tunya or Victoria Falls.

The Holocaust Memorial behind the Brandenburg Gate, Adlon Kempinski and the US embassy, another major tourism attraction denoting about 6 million innocent murdered Jews in Europe during the Hitler era was also empty for the first time since I lived in this beautiful city.

Barak Obama in 2008 gave a ´sold out´ speech a minute from here just before he became the 44th President of the United States in January 2009.  They said he would have won as Chancellor of Germany if he ran.

New York architect Peter Eisenman won the bid to build the holocaust memorial that opened in 2005 in honor of the innocent murdered Jews under Adolf Hitler.

The site covers about 19,000 square meters, Eisenman placed 2711 concrete slabs of different heights sort of like tomb stones (in picture) and its open night and day but empty today.

I proceeded to Bernauer Straße, on the boundary between the districts of Wedding and Mitte that became a historical site with the erection of the Berlin Wall.

The Berlin Wall was erected here in August 1961 in front of the East Berlin houses to separate East and West Germany. The two Germans were controlled by the Americans on the West and Soviets on the East.

It’s this famous wall, another crowd puller that President Ronald Reagan is recalled for saying, “Mr. Gobachev, tear down this wall,” but the war only fell in the night between 10th to the 11th of November 1989 on Bernauer Straße.

I could go on and tell you about my silent experience on Tiergarten Park aka the city’s green lung – just like New York’s Central Park or London’s Hyde Park.

I could share my walk to the Reichstag located in the same area near the Presidents official office and residence where Ambassadors present credentials,  the Schloss Bellevue. The story was the same-Empty.

Tiergarten attracts thousands of joggers, skaters, cyclists and walkers, as well people wanting to just relax in the sun especially now in Spring.

I would be remiss if I forget to mention the bronze sculpture at the top of the column near Tiergaten that weighs 35 tons and measures 8 meters and 30 centimeters.

It represents Victoria, the goddess of victory or the Roman equivalent of the Greek goddess Nike.

Despite its huge place in history, locals call this gilded bronze statue, Goldelse, the “Golden Elsie”. It was empty and so was the Brandenburg Gate built between 1788 and 1791, the Brandenburg Gate was Berlin’s first Greek revival building according to history documents.

The Gate is 26 meters high, 65.5 meters long and 11 meters deep, and supported by two rows of six Doric columns.

The history is that in 1806, when Napoleon’s army took Berlin, the French Emperor had the Quadriga transported to Paris as war booty and a sign of his victory.

In 1814, after Napoleon’s forced abdication, the Quadriga was returned to Berlin where it once again adorned the Brandenburg Gate,  facing towards the east and the city Centre.

It is here at the Brandenburg where the US embassy is located opposite the French embassy, near the Russian embassy and the British embassy. It’s a hot diplomatic address.

If you watch Netflix, Berlin Station is set from this location ostensibly in the US embassy. This is the nerve centre of Berlin history with the Reichstag or parliament house around the corner.

This is the place to get a crash course in rich German history for those of us that are interested in the past because if you don’t learn from the past mistakes, you are likely to repeat them, so the adage goes.

The coronavirus is the worst thing that happened to Germany and my beloved country Zambia, the whole world actually but its nasty effects made me look at both my country Zambia and the city of Berlin more closely.

I went into one restaurant near Checkpoint Charlie; it was cordoned off like a crime scene. Only ´takeout food.´

Leaders around the world are working around the clock to shut the virus down and learn lessons from it for the future in order to save lives and the economy.

As a writer on the other hand, I saw an opportunity to add a personal take to the body of literature in this short essay having been around when it all happened.

This is my personal experience on how the coronavirus gelled everyone to save the world regardless of religion, nationality or colour.

Lessons from the coronavirus, economic socio, health and or political abound.

My take back as a published author is that the world today can stand together on  one common cause depending on what has affected them. Vielen dank, wash your hands and don’t touch your face.

Remember Winston Churchill said, “History will treat me right, I intend to write it.”

And also our President Edgar Lungu´s own advice, let us write our own Zambian history and not live it to foreigners.

Anthony Mukwita is the author of Against all Odds, President Edgar Chagwa Lungu´s Rough Journey to State House.

Caption: The images attached to the story were taken at various locations mentioned in the essay such as the Brandenburg Gate, Holocaust Memorial, Checkpoint Charlie and the Berlin Wall.