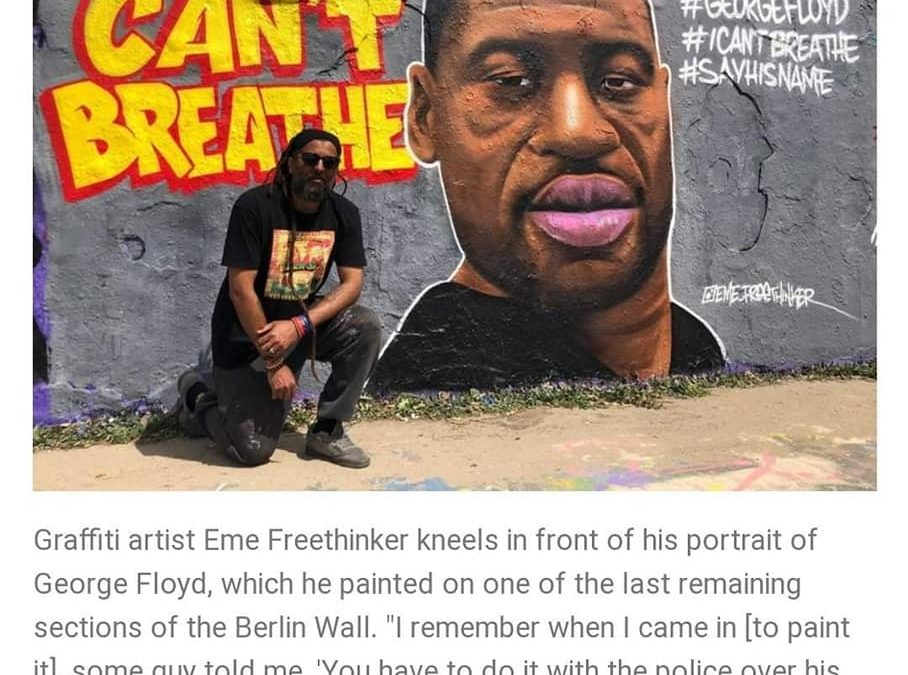 …´I can’t BREATH` said George Floyd as he died

From Amb. Anthony Mukwita in Berlin.

When George Floyd was born some 46 odd years ago, he entered the world without noise. Only his family acknowledged his ´grand entry´.
His departure in May 2020 ,however, reverberated across the proverbial ´Coast to Coast like Butter on Toast,´ leaving waves of mixed emotions along his death trail.
Born George Perry Floyd Jr., a bloke who did odd jobs such as driving trucks or doubling up as a security guard, no one ever thought his death would attract the ire of Barak Obama and the fire of Hollywood luminaries such Dave Chappelle, Trevor Noah and Oprah Winfrey.
Least of all Spike Lee and the Rev Al Sharpton.
No one knew his death would light up cities (in antiracial protests) across the world from Berlin to London, New York to Paris with intense moral indignation against the age-old race issue that goes back to the days of Jesus Christ.
I was personally flabbergasted at his demise and I don’t flabbergast easily.
In Reverend Al Sharpton´s words, George´s life resonated with the Psalms story of the ´Stone that the Builder had refused´ that became the head corner stone.
He is a guy that had doors shut down his face zillion times while alive and a totally different guy post humous. For a moment, people forgot that they were living under the cloud of the bug.

*Eulogising George Floyd after the fact*

Before I join you in eulogising George, its important to note what was happening at the time of his death at the brutal knees of a Minneapolis rogue blood thirst racist cop identified as Derek Chauvin.
When you are in ´Shangri-La´ Zambia the story of George appears like stuff made for TV, so remote but hold onto the keyboard and read this in full to comprehend the situation and injustices people have suffered over the years.
Also forget not the fact that George is happening under the COVID-19 cloud.
When George died, the United States had recorded one of the highest number of fatalities at about 180,000 fatalities in June and about 40 million job losses due to the bug that ravaged the whole world, my country Zambia was not left unscathed.
Some hundreds of infections and 11 fatalities my host country had some 8000 plus deaths.
Many countries were on lockdown, frustrated and just barely getting by without killing each other every day that passed by, so when suddenly a huge and perfectly healthy black man breathed his last under the knee of a cop, the negative juices of contempt and race just resurfaced with full force.
Riots were recorded even in peaceful Berlin.
It was like adding salt to a festering wound or gas to a fire, already burning well.
The reason for the contempt over the Floyd murder was because it was not the first, nor the last time such an atrocity would recur, as we all witnessed the gunning down of Rashard Brooks in Atlanta days after George Floyds primitive public execution.
Georges murder occurred at a time everyone was home, glued to either their televisions under lockdown.
The world watched in shock as one Derek Chauvin chocked to death a descendant of a slave from Africa shipped in shackles and yoke into the USA more than 300 years ago.
Momentarily, Floyds brutal death was the only show on Tv it was reminiscent of Prometheus stealing fire from the gods.
The world remained united in lock down under the COVID cloud against Chauvin.
We all grit our teeth and died a hundred times over with George as Derek Chauvin slowly, gleefully and with undisguised relish sucked every breath out of George´s body.
“I can’t breathe ” were George´s last words
This was perhaps the first time the world united in condemning an act of evil racism with all the contempt pointed at one person—Chauvin.
Chauvin knelt on Georges neck in premediated fashion as George pleaded for relief while choking his last eight minutes on earth saying, “I CANT BREATH…”
After that it was the sound of silence for George aged only 46 and no one will ever know what God had for him in stock had not Chauvin not murdered him.
At this time, the COVID-19 bug was already burning down the entire globe like a wildfire and yet when the last 8 minutes of George´s death footage overtook the news world.
Even the bug recoiled into its shy cocoon.

One of the loudest condemnation of the police wanton action was from the popular New York Governor Andrew Cuomo.
I found Cuomo’s statement profound I thought it best to repeat it verbatim, “I stand with the protesters , and I think all well-meaning Americans stand with the protesters.
Cuomo added, “It’s not an isolated incident. It is a continuum of cases and situations that have been going on for decades and decades and decades. These are just chapters in a book and the title of the book is “Continuing Injustice and Inequality in America” and these are just chapters.
Ominous words those that would become a reality with the murder of Brooks in Atlanta.
“The Chapters started modern day Rodney King in Los Angeles, 1991, Abner Louima in New York, 1997, Amadou Diallo in New York, 1999, Sean Bell in New York, 2006, Oscar Grant , Oakland, California, 2009, Eric Garner, New York City, 2014, Michael Brown, Missouri, 2014, Laquan McDonald, Chicago 2014, Freddie Gray, Baltimore , 2015, Antwon Rose, Pittsburgh, 2018, Ahmaud Arbery in Georgia, 2020, Breona Taylor in Kentucky, 2020, George Floyd in Minneapolis, 2020,” said Coumo.
“That’s why the outrage. That’s why the frustration and the anger. It is not about one situation, it’s about the same situation happening again and again and again and again,” the Governor said.
“And seeing the same thing and not learning the lesson and then it is that happening in the broader context and a broader circumstances, which is what is going on with the coronavirus, which affects and kills more minorities than anyone else,” Cuomo said while also reaffirming that minorities were the most to suffer during the bug attack, even without police brutality.
“You look around this country and you look at the people who are dying of the coronavirus, it is disproportionate African-American people! And it is just a continuing injustice and that’s the frustration and that’s the protests.
Nobody is sanctioning the arson and the burglaries but the protesters and the anger and the fear and the frustration, yes! yes! And the demand is for justice!” Cuomo said.
He added, “and when the prosecutor came out and said well there is other evidence but I can’t tell you anything more than that, that only incited the frustration. Injustice in the justice system, how repugnant of the concept of America. And over and over and over again, I stand against the arson and the burglary and the criminality, I stand with the protesters and I think all well-meaning Americans stand with the protesters. Enough is enough, how many times do you have to see the same lesson replayed before you do something. This country is better than this, it has been better than this and it shouldn’t take this long to end the basic discrimination and the basic injustice,” said Cuomo.
This was perhaps one of those few ties in global history when everyone seemed to unanimously agree that a wrong had been done and a justice needed to prevail.

*The ones lost along the way*

If injustice was a fire, George suddenly became the gasoline everyone was riding on bringing up all the injustices people of colour had been exposed to from Emit Till to Martin Luther King and Malcom X in the USA.
If you recall when the bug engulfed the world and killed almost half a million people in about three months, that was all the world discussed—the bug.
But hours after Georges death, the only thing the world discussed, as riots erupted across the US was George.
Reverend Al Sharpton whose name is linked to each and every Black American history story said on live TV that George did more for Americas (in) equality narrative in his death than he ever did alive. Georges death was ironically such a divine intervention.
I personally recall my son walking in my home office livid at how this brother went down.
I didn’t understand what a 15-year-old stud like *Lubinda* was so upset about until later in the night when I saw the video, I called my wife who was upstairs and I wept.
Back to reality though, are we going to see a change the manner we treat each other after Brooks and George?
Or is this just the gift that keeps on giving?
We have time to change racial attitudes especially as the bug rages on, shutting down manufacturing plants, farms, hotels, schools and airports etc and just life as we knew it.
Things are bad but like I always say, being an incurable romantic, I see loads of good coming out of this deadly bug.
A fast railway track between Berlin and Germany funded by a 2 trillion EU stimulus package that shall ensure that people can travel between the two cities in just four hours is now on track.
Or the agriculture prospects in Zambia where I read an American “non-profit organisation has launched a $40 million joint venture with one of Zambia’s top farm suppliers to boost crop yields and food security as farmers struggle to access finance amid the COVID-19 pandemic.”
Zambia could be a regional grain basket with initiatives such as the one above and the other I earlier informed you about pushed by German millionaire businessman Carl Bruhn of Amatheon who is now encouraging Zambians to grow a high value cash crop called Quinoa. It fetches good dollar in Zambia if you don’t mind getting your hands dirty.
So there’s the downside and the upside of the bug, the question is which side do you want to find yourself on when it’s all done?
I still never cease to reaffirm the great job President Edgar Lungu and his team have done in keeping a lid on bug deaths in Zambia, it could have been worse.
Also a shout out to my host country Germany ever for coming up with a huge almost 20-million-euro aid package to help Zambia clip the bad bug affects.
To everyone don’t forget the dark stain of race tolls for all of us. Make love not racial slurs or actions.
Sometimes when everything seems to be going bad for one reason or another beyond comprehension, a prayer to God is the best remedy.
By the way did you know that Spanish Flu that killed about 50 million people and infected half a billion others did not start in Spain? Its started in France.

Mr ANTHONY MUKWITA is a published author, former Editor in Chief and current Ambassador to the Federal Republic of Germany for Zambia. He penned the book ´Against all Odds, President Edgar Chagwa Lungu´s Rough Journey to State House’ and has won a World Bank Investigative Journalism Award. This personal essay was first published on his Facebook page.
http://www.againstallodds-byanthonymukwita.com/
©Anthony Mukwita 2020.
Part 12…