I love Zambia’s nature and wildlife 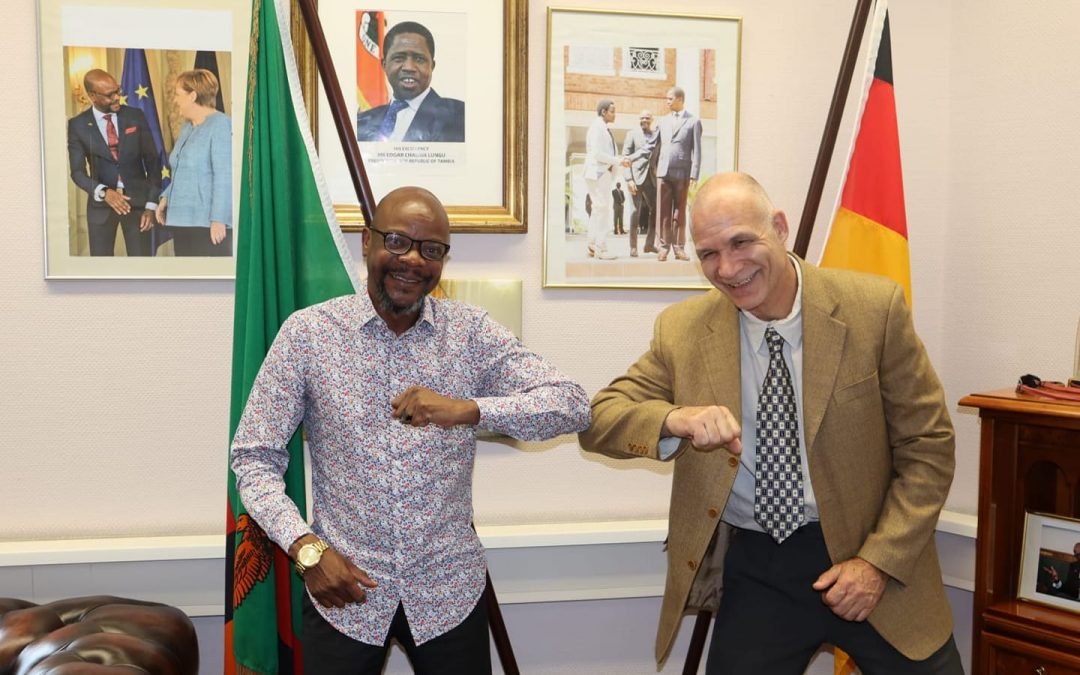 He was speaking when he paid a courtesy call on Zambia’s Ambassador to Germany, His Excellency, Mr. Anthony Mukwita on Axel Springer street where the embassy is located.

“As a family, we simply love wildlife and Zambia has plenty to offer in this regard”, Mr. Kopsieker said. Mr. Kopsieker’s wife is a biologist who holds a PhD while his daughter specializes in wildlife management.

Returning to southern Africa for the second time having served in Botswana before, Mr. Kopsieker has extensive experience working in Africa with Ghana among the countries where also served. He has also served as head of the budget office at FES in Germany.

In his remarks, Ambassador Mukwita told Mr. Kopsieker that Zambia was globally recognized as one of the top five most peaceful countries on the African continent. These credentials, the senior diplomat said served as one of the major attractions on the part of foreign visitors.

“I invite you to explore the country and its vast beauty”, Ambassador Mukwita said adding, “don’t just work, have fan too.”.

FES is a political foundation closely associated with Germany’s Social Democratic Party, SDP, which is currently in government with the ruling Christian Democratic Union, CDU under the leadership of German Chancellor Angela Merkel.

The foundation promotes the ideals of social democracy, a political system that espouses democratic participation and a fair distribution of wealth. In Zambia, where FES has been in operation for decades works closely with the Zambia Congress of Trade Unions, ZCTU and the Mine Workers Union of Zambia.

FES also works closely with the Zambian government, especially the Ministry of Labor, a relationship that has resulted in recent labor law reforms.

Over a year ago FES invited Zambia’s Minister of Labor, Mrs. Joyce Simukoko to participate in a conference related to labor matters. When the organization held its 55th anniversary galla dinner in Lusaka, Zambia’s Vice President, Madam Inonge Wina was the guest of honor.

“We like to stay as close as possible to political processes because that is the area of our operation where we wish to add value where possible”, Mr. Kopsieker said.