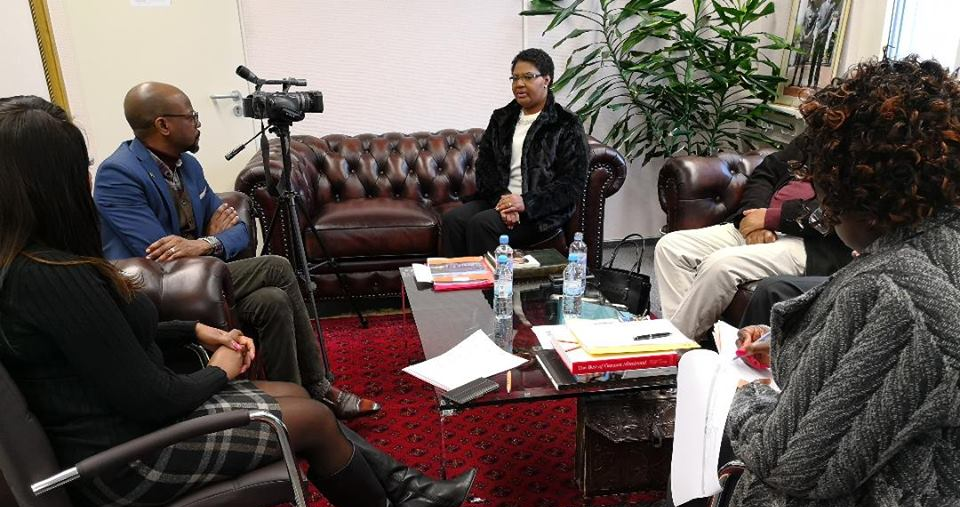 Its official—ITB Berlin Zambia ‘sold-out’
…. ZTA Chief executive Fred Chaila tells Amb. Mukwita, PS Mutale
January 15, 2018
With about 50 days to go before Europe’s largest travel and tourism fair kicks off in Berlin, Zambia’s Ambassador to Germany Mr. Anthony Mukwita has been given the good news—The fair is sold out!

The news was delivered at his Axel Springer office during an update on the travel showpiece when Zambia Tourism Agency, ZTA, Chief Executive Officer Felix Chaila paid him a courtesy call over the weekend in the company of Tourism Permanent Secretary Dr Liya Nawa Mutale.

“Normally we would have about 11 exhibitors but we have so far signed up a total of 30 who have confirmed participation and half of that number has already paid up exhibition fees in full,” Mr. Chaila said.

Calling it “a good problem”, the ZTA CEO said the overwhelming response from the private sector provides Zambia with a perfect opportunity to fully utilize the historical moment in the country’s engagement with Europe in terms of tourism.

Overjoyed by the news ambassador Mukwita said, “over subscription of the event does not mean more Zambians cannot sign up because the more, the merrier”.

And Tourism Permanent Secretary Dr Liya Mutale said the German market was opening and presenting Zambia with good opportunities for expansion into Europe.
“There may be language barriers but there are tour operators with the ability to speak other languages such as French and Chinese and Germany could be considered”, she said.

Dr. Mutale informed ambassador Mukwita that while the Zambian government through ZTA was marketing its tourism potential to the rest of the world, it had also embarked on local tourism.

“For Zambians to sell the country’s tourism potential, they must have a knowledge of their country. So we are offering a domestic tourism package to the public servants”, the Permanent Secretary said. Speaking during the same meeting, Zambia’s Honorary Consul and ITB organizer Jorrit Plambeck called for comprehensive messaging.

“While it is important that you share the country’s traditional and natural heritage, it is equally important to tell them about such practical things as the availability of Internet services that would enable tourists to instantly send images of what they see on the ground back to their places of origin”, advised Mr. Plambeck.

The Permanent Secretary and the ZTA CEO were in Germany to check on preparatory efforts in respect of the tourism fair. They have since expressed satisfaction at the work covered so far.

President Lungu has recently increased calls to diversify the Zambian economy and increase GDP earnings via sectors such as tourism and agriculture instead of copper alone.
Zambia’s position as ITB 2018 Culture and Convention

Partner is the first since the country started exhibiting at the prestigious event that attracts 100,000 visitors daily during the show and exhibitors from 180 countries annually.