Lessons from the Maldives 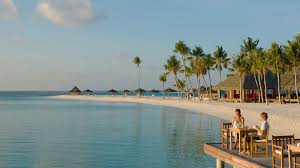 The Republic of Maldives Ambassador to Germany H.E Jameela Ali Khalid Thursday paid a courtesy call on her Zambian counter-part H.E Anthony Mukwita at the Zambian mission in Berlin and exchanged views on a wide range of issues of mutual interest starting from the economy to tourism.

Tourism is the backbone of the island nation economy and H.E Ali Khalid of the Maldives, a nation of 400,000 people, 1200 Islands (although only about 200 are inhabited) said it attracts on average about 1 million tourists annually.
This is largely owing to its aggressive and effective way of advertising its tourism on international media platforms such as CNN.

“There are some lessons for us to draw from the Maldives that could inform our tourism efforts as Zambia continues to diversify”, Ambassador Mukwita said after the courtesy call.

Tourism is the mainstay of Maldives’ economy which the country seems to market well as evidenced by the high profile international visitors the Island nation attracts that includes a high cast of Hollywood royalty.
Ambassador Khalid was accompanied by her Minister-Counselor Shiruzimath Sameer. H.E Ali Khalid presented her credentials last year on the 9th of March as the first Ambassador of the Island nation to the Federal Republic of Germany.

At UN level last week, the Maldives and Zambia for the first time established diplomatic relations.
Ambassador Mukwita also shared with his colleague that Zambia was in March 2018 for the first time ever the Convention and Culture Partner at the ITB Berlin, the worlds largest tourism expo that attracts about 180 countries annually at the Messe with more than 100 000 visitors daily. H.E Jameela also signed the embassy visitors book.