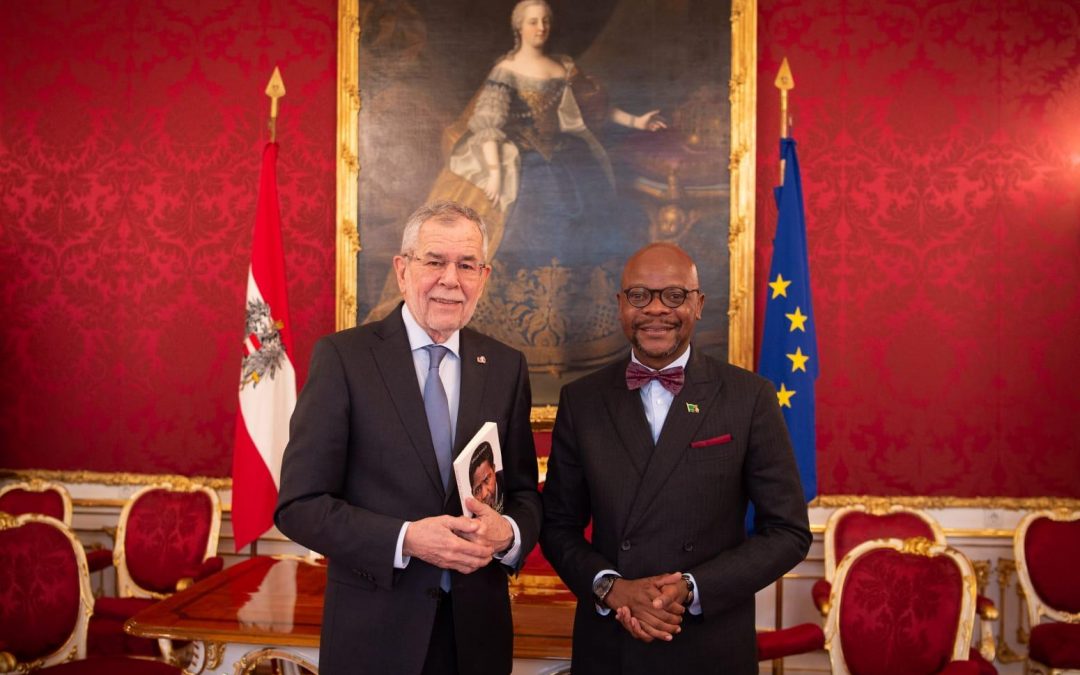 President Alexander Van der Bellen of Austria has called for stronger relations between his country and Zambia. Speaking when he received letters of accreditation from Zambia’s Ambassador to Germany His Excellency Anthony Mukwita, President Bellen said he looked forward to deeper engagement in many areas of mutual interest.

“Your country is a model of democracy,” the Austrian leader said in reference to Zambia’s peaceful and stable political environment enjoyed since independence.

In a brief exchange, both President Bellen and Ambassador Mukwita touched on subjects of mutual interest that ranged from the economy to climate change, an area of particular interest to the Austrian leader who is a former university professor.

“President Lungu is equally interested in matters of climate change as Zambia has been affected by its effects” Ambassador Mukwita said. On a personal note, President Bellen told the Zambian envoy that he was aware of ambassador Mukwita’s media background and the fact that he was an author.

“Indeed I authored a book that marked the rise of President Lungu to power and the love for peace demonstrated by the Zambian people no matter the depth of their political differences”, Ambassador Mukwita said as he reached for a copy he had autographed for the Austrian leader.

When the Zambian envoy later in the day paid a courtesy call on Ambassador Johannes Peterlik, deputy Foreign Affairs Minister, the Austrian official told him that President Bellen looked at the book’s title and said, “the title of this book might as well be a reference to me”. The book is entitled, “Against All Odds: President Edgar Chagwa Lungu’s Rough Journey to State House”.

President Bellen is a former Head of the opposition party – the Green Party, but chose to run for the office of President as an independent and won a six-year term. The position of president in the Austrian political system is the only position voted for directly countrywide. The office holder is the Head of State.

He serves as the moral leader of the country ensuring unity and facilitating political participation of the marginalized members of society. The day-to-day running of government is the responsibility of the chancellor. Austria is the 27th largest economy in the world with a GDP of over 400 billion dollars, a population of about 8 million people and a per capita income of over 52, 000 dollars.

The country manufactures and exports car parts, heavy-duty machinery, equipment, chemicals, food-stuff among many other goods.

In the context of President Lungu’s economic diplomacy, Ambassador Mukwita told the Austrian Deputy Foreign Affairs Minister that as the second largest copper producer in Africa, Zambia, which also mines other minerals such as cobalt, will be exploring business and investment opportunities with Austria that could be mutually beneficial.

“As Europe gradually moves towards green technology and electric cars, Zambia’s cobalt and copper could, with value addition, be a significant ingredient in car parts manufactured in Austria”, Ambassador Mukwita said.

Zambia has diplomatic relations with Austria on a non-residential basis while Austria recently opened a consulate in Lusaka.