More added to the national grid 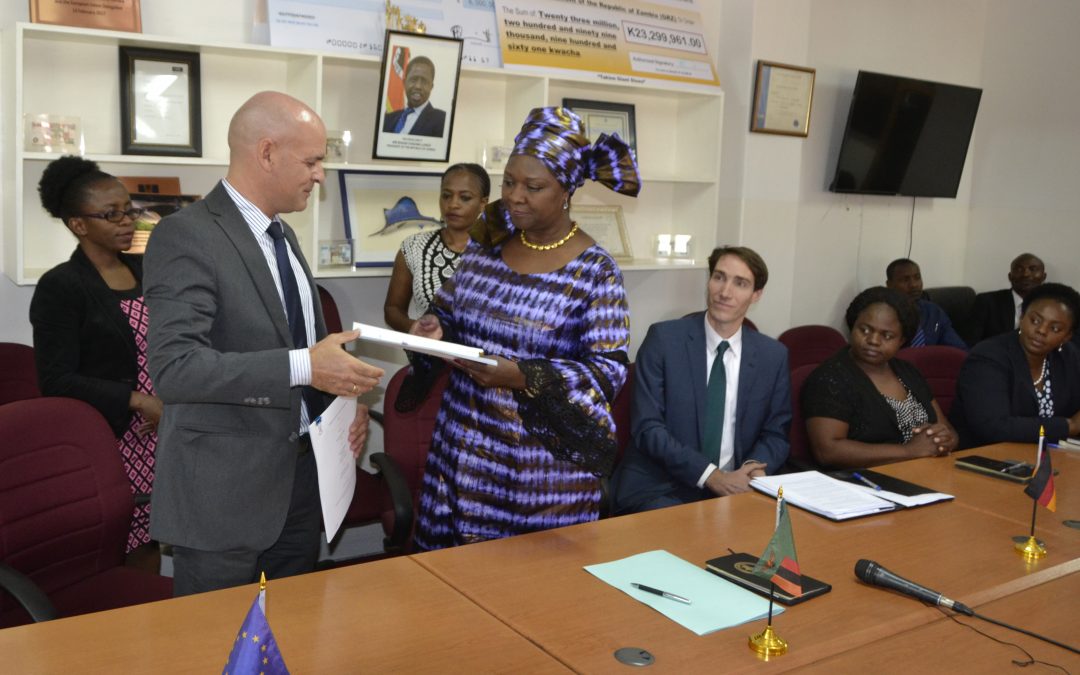 Zambia has received energy sector GRANTS totaling K333 million Kwacha of which K122 is from KFW Development Bank of Germany and K211 from the European Union Sustainable Energy for All Window of the EU-Africa Investment Facility. The funds, meant for the Southern Division of Zesco, are targeted at improving distribution, expanding the connectivity to households, and rehabilitating and reinforcing power infrastructure.

12, 000 household and 200 commercial/public connections will be established during the project, resulting in more than 60, 000 people having access to grid-power. The project is for a period of 24-36 months.

Speaking at the event, Head of Development Cooperation at the Germany Embassy in Lusaka Dr. CHRISTOPHE FRITZ outlined the objectives of Germany-Zambia Energy Sector Cooperation as twofold; contributing to achievement of the UNFCCC Paris climate change agreement and Zambia’s ambitious nationally determined contributions, particularly through supporting the expansion of renewable energy; and, improving access to sustainable energy supply for all Zambians.

And Head of Cooperation of the EU Delegation to COMESA and Zambia GIANLUCA AZZONI said the GRANT contribution of the European Union is in addition to the funds allocated under the EU-Zambia 11th European Development Fund.

“We are pleased that ADDITIONAL FUNDING can be mobilised to the benefit of Zambia in a sector that is so crucial for inclusive social and economic development,” said Mr. Azzoni, and he added that, “at least 12,000 new connections to households and 200 new connections to commercial and public users will be established, resulting in more than 60, 000 citizens having access to grid-connected power.”

“The Zambian Government has committed itself to grow and diversify the energy sector by expanding power generation and transmission capabilities as espoused in the Seventh National Development Plan,” reaffirmed the Minister, adding that, “through the expansion of infrastructure and upgrading of technology, the Government will be able to provide clean energy while encouraging growth and preserving the environment.”

She further stated that, “through the rehabilitation and reinforcement of the grid, the project will improve security of supply, reduce power losses and enhance energy efficiency,” and that therefore, “more power will be available for distribution and more households and productive users will be connected.”

Mrs. Mwanakatwe stated that under the access component project, funds will be used to connect small businesses and households in areas currently not connected to the national grid but located in the vicinity of the project region. This will be done through a selection of rehabilitation and reinforcement measures which will include works at 12 substations ranging from 132 Kv down to 11 Kv and several other new transmission lines at voltage levels of 132 Kv, 66 Kv and 33 Kv.

“The project will go a long way in reducing the use of energy sources such as charcoal, which are not friendly to our precious environment because of the tree cutting and burning activities involved,” the Minister concluded.

Among those in attendance during the signing ceremony were STEPHAN NEU – Director of the KFW Development Bank [Lusaka]. Others were Ms. JOYCE SUNDANO – Controller [Internal Audit], Treasury Counsel Kawama Goma-Simumba, some Directors in Ministry of Finance, and members of the media.

For Ministry of Finance