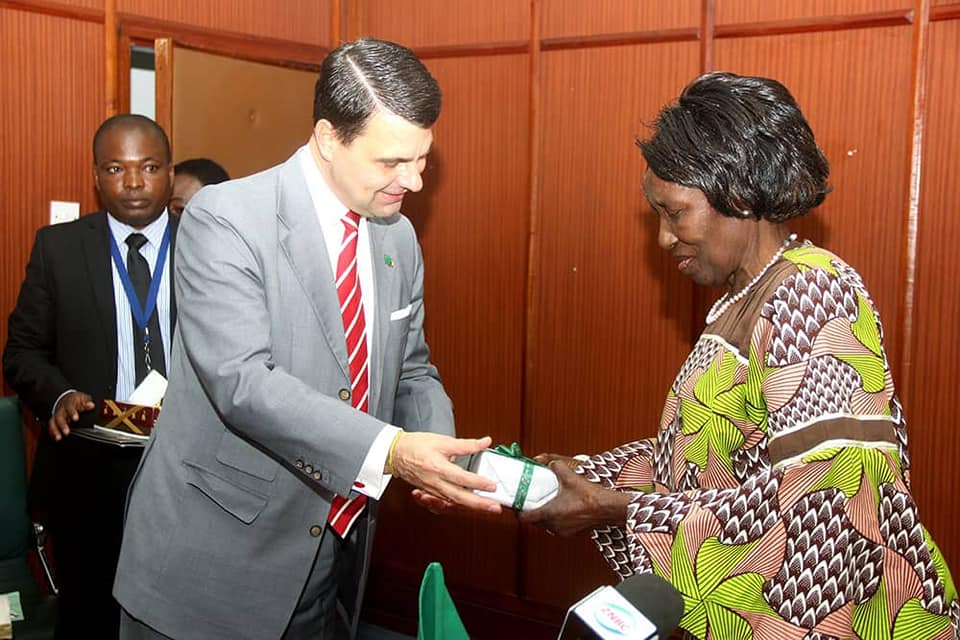 …Vice President Inonge Wina tells Austrian delegation
Lusaka 04.12.19
The Vice President of Zambia Mrs Inonge Wina has implored Austria to open a full-fledged embassy in Zambia in order to escalate economic diplomacy and other diplomatic relations.
Mrs Wina was speaking in her office today when she met a high-level delegation led by Dr Johannes Peterlik, the Secretary General in the Austrian Foreign office who was accompanied by H.E Anthony Mukwita, Zambia’s Ambassador to Germany and none resident representative to Vienna Austria.
“We look forward to the day Austria will open a fully-fledged embassy here in Lusaka order to increase cooperation between our two countries,” Mrs Wina said, “you must note that one of the greatest strengths of Zambia is its 55-year undisrupted record of peace and stability which our people cherish.”
She was reacting to Dr Peterlik who told the vice President that Austria was looking at probably expanding its African foot print and Zambia surrounded by eight countries could just be such a destination.
“Currently we have an Ambassador for Zambia Dr Christian Fellner resident in Nairobi where he oversees about ten other countries,” Dr Peterlick said, “Zambia is a country we could look at.”
Dr Peterlik paid glowing tribute to Mrs Wina for breaking the record as Zambia’s first female vice President, a very influential position in Zambia number two only to President Edgar Lungu.
“Congratulations for being elected as the first female vice President we have a lot to learn from you and your involvement with women’s work in the past including the various official visits you have made to international meetings to Austria,” said Dr Peterlick.
Vice President Wina is a past long time office holder of the seat of the NGOcc chair before she actively got involved into politics as the Chair of the ruling party and eventually President Edgar Lungu’s running mate and vice President.
Dr Peterlik took time to inform Mrs Wina that Austria was happy with the work Ambassador Anthony Mukwita was doing in collaboration with Austrian honorary consul Heinz Messinger.
AREAS OF COORPERATION
The vice President implored Dr Peterlick accompanied by a business delegation of eight to explore investment opportunities in the areas of:
• Renewable energy following the crashing negative effects of climate change that has plagued the Zambian energy sector
• Health especially specialised health such as cancer treatment and detection which affects a huge number of Zambian women
• And general diplomacy
Dr Peterlick introduced the firms present ranging from security printing to health that had accompanied him.
Ambassador Anthony Mukwita described the meeting in his introductory remarks as “a major diplomatic milestone as it is happening for the first time at this highest level of the vice President and the Secretary General in 55 years.”
The senior diplomat said he was hopeful that diplomatic relations with the US$490 billion GDP rich country with a population of 8 million people would reach fruition soon.
The vice President’s team comprised Minister Ms Olipa and Permanent Secretary in the vice Presidents office Mr. Stephen Mwansa.
Ambassador Mukwita said the delegation had more meetings lied up with Foreign Affairs Minister hon Joseph Malanji, the Economics Association of Zambia, the Zambia Development Agency and management of the University Teaching Hospital.
“This is a tightly packed meeting, but we are happy and grateful to the Ministry of Foreign Affairs for according as a high-level engagement with Vice President madam Inonge Wina whose schedule we know is very busy,” Ambassador Mukwita.
“The take away from this I must emphasise with unparalleled excitement is Dr Peterlik and her honor the vice President discussing the possibility of a fully-fledged embassy here. Both of them touched this matter,” said Ambassador.
AME International whose Managing Partner Heinze Messinger was in the delegation have already opened discussions to rehabilitate the cancer centre and paediatrics wards at UTH.
Once an MoU is penned between Zambia and Austria, Zambia could receive zero rated financing for the two projects from the government of Austria.