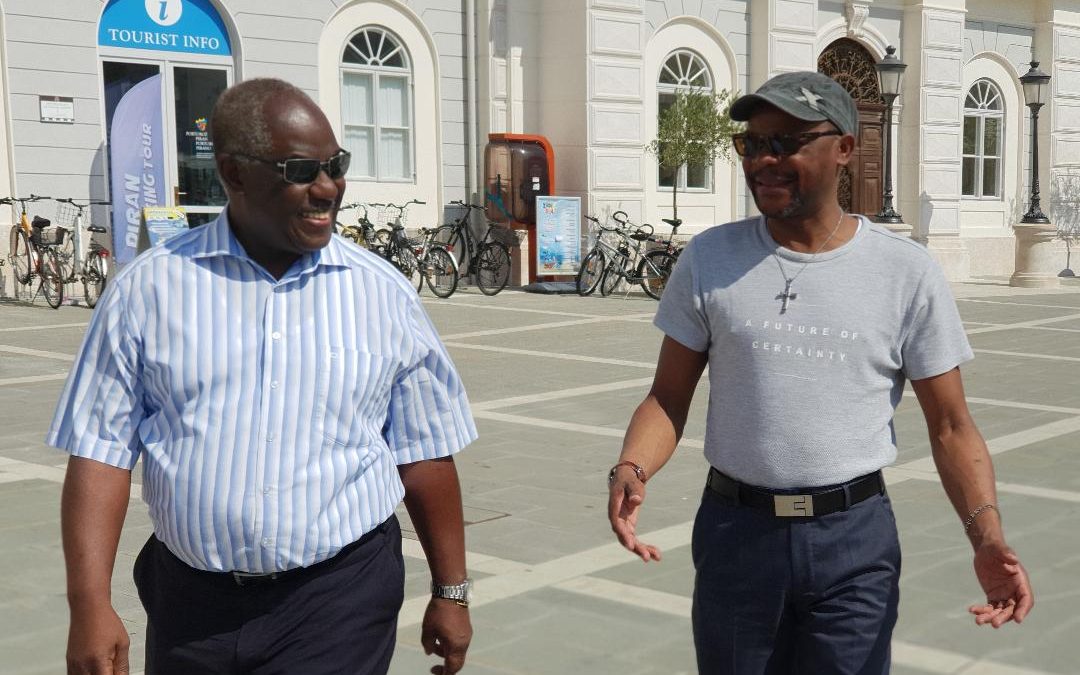 …….as he learns from the mayor of Piran

President Edgar Lungu was right to raise the Ministry of Tourism to one of the major economic ministries because the sector has a lot to contribute to the development efforts currently underway in the country. Zambia’s ambassador to Germany Anthony Mukwita made the observation when he called on the Mayor of Piran, a Slovenian tourist destination on the coastlines of the Adriatic Sea bordering Italy and Croatia.

Ambassador Mukwita, who just presented his credentials to Slovenia’s President Borut Pahor as a non-resident ambassador wondered how Piran made money from tourism.

“For every tourist, we make 1, 50 euro in addition to a further small fee each hotel pays along with occasional leasing of municipality land or space for social functions”, says Dr. Peter Bossman, the Mayor of Piran.

Dr. Bossman, a Ghanaian-born black Mayor says the tourism sector in Piran has been growing between 8 and 10 percent per year and contributing to 80% of employment needs in the city. At national level, the Mayor says 20% of the country’s total tourism revenue comes from his municipality.

Piran’s major tourist attractions include the coastlines of the Adriatic Sea and the fact that it is one of the oldest cities in this part of Europe whose history is attractive to many tourists. Between April and October, the city sees the highest number of tourists mainly from nearby European countries such as Germany and Italy, among others.

“But how did a black man become a Mayor in a European town”, Ambassador Mukwita, almost apologetically asked Dr. Bossman, who comforted the Zambian envoy with a smile as he assured him that he has been asked the same question countless times and was always glad to share the story.

He was born in Ghana but traveled in several parts of the world because his father was a diplomat in the Ghanaian government. During the military rule of Lt Col. Ignatius Kutu Acheampong in the 70s, Peter was a young student at university in Ghana. But he was forced to flee the country when he took part in student protests against military rule and was earmarked for arrest.

The Yugoslav embassy gave him a visa and took up medical studies in then Yugoslavia. In the fourth year, he met his current wife with whom he has two daughters. He set up a private medical practice, which runs to this day. At one point, he had wanted to return home but says his patients wrote a petition demanding that he stays. “My father told me to stay if my patients needed me”, Dr. Bossman, whose father was equally a medical doctor recalls.

Coming from a political family, Dr. Bossman did not resist the temptation when he was asked to run as Mayor, a position he has held for the past eight years.

Reflecting on his interaction with the Piran Mayor, Ambassador Mukwita, sitting at one of the many restaurants located on the coastlines of the Adriatic Sea said, “I can understand why President Lungu raised the status of the Ministry of Tourism in his government: tourism can indeed alter the country’s economic fortunes for the better”.