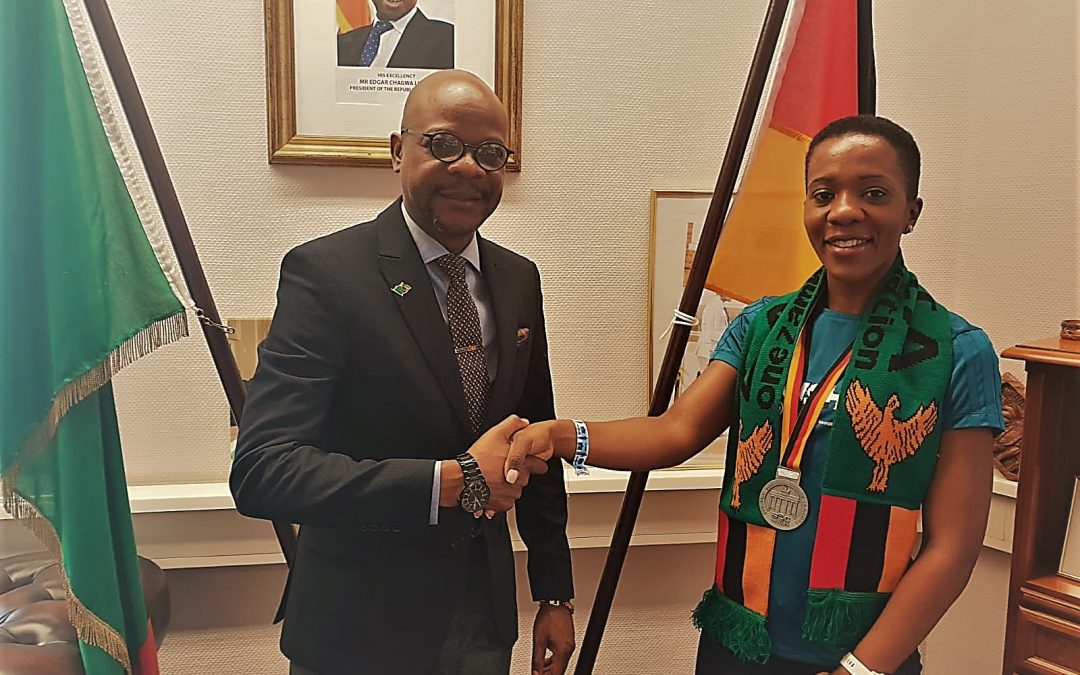 Zambia’s ambassador to Germany, His Excellency Anthony Mukwita has paid tribute to Maya Mwanawasa for representing Zambia at the just-ended BW-sponsored Berlin Marathon, one of the six major world marathons. Ambassador Mukwita told Ms. Mwanawasa when she paid a courtesy call on his Axel Springer street offices in Berlin that he was proud of her for raising the Zambian flag at the global event.

“Sport’s diplomacy is increasingly playing a major role in promoting world unity and promoting the interests of nations on a global stage”, observed ambassador Mukwita.

The Zambian envoy said he would like to see as many Zambian athletes as possible coming to the Berlin Marathon and raise the Zambian flag. Furthermore, Ambassador Mukwita observed the need for economic diplomacy to include sporting disciplines as they have the potential to absolve unemployed youth who could rise to a professional status and earn an income for themselves, as well as contribute to the gross domestic product of Zambia.

Ms. Mwanawasa told ambassador Mukwita that she participated as a social and not a professional runner. She also said she did purely out of interest and out of the love of staying healthy.

“I used to weigh 91kg when I contemplated becoming a marathon runner”, she recalls. But now, the 36year-old single mother of a six-year-old child weighs about 60kg, a significant drop achieved in 5 years.

“Someone might think it is expensive to lose weight and stay healthy”, Ms Mwanawasa told the ambassador, adding, “all one needs is a pair of good running shoes and the ability to place one foot in front of the other”.

Ms. Mwanawasa managed to finish the 42km marathon in about 4hrs. She is already preparing for the next Marathon due in three weeks in Chicago, USA. Ms. Mwanawasa did not win any prize but expressed joy at the fact that she was one of the 44,000 runners who represented 133 countries. The marathon was won by a Kenyan athlete, who runs professionally.

Ms. Mwanawasa, like her late uncle and 4th President of Zambia, Patrick Mwanawasa, is a lawyer with Ms. Mwangala Zaloumis’ Dove Chambers.