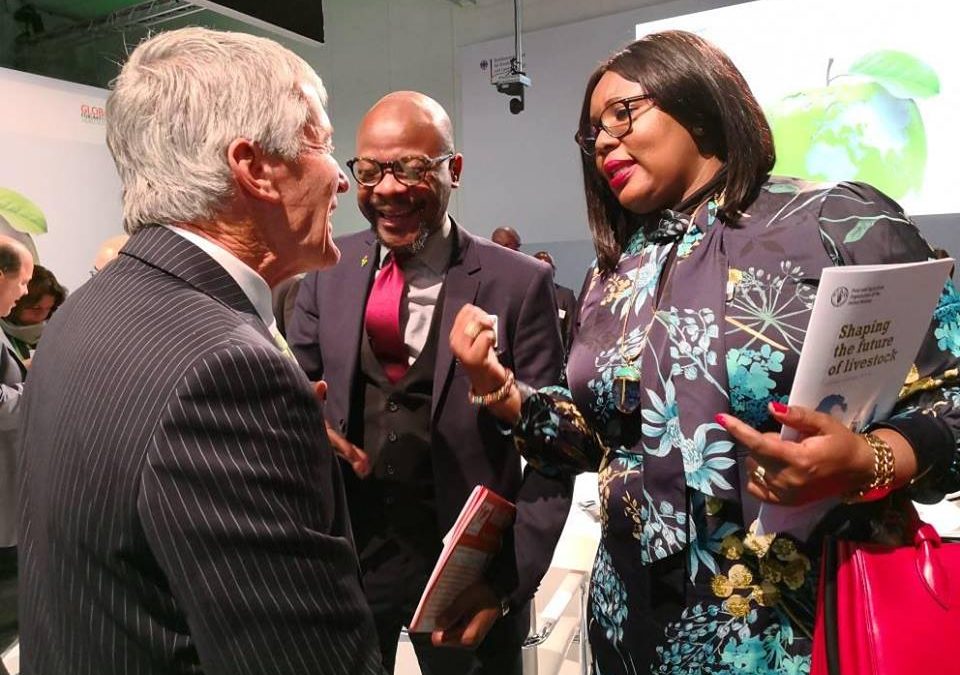 Think like a businessperson, Dora tells farmers
……………Stop thinking of yourself as a peasant farmer and we will stop treating you like you
January 20, 2018
Berlin

One of the major contributors to under-development of the livestock sector in Zambia has been the failure to equate it to business, Agriculture Minister Dora Siliya has said. Speaking at a high level panel discussion in Berlin, Germany, Ms. Siliya said the livestock sector in Zambia has for far too long been a traditional affair where keeping animals has simply been seen as a way of life.

“We are at that level where we have challenges of looking at livestock in a very traditional manner making it as our biggest challenge the change of mindset so that keeping animals is viewed as a business which can create jobs and improve livelihoods”, said the Minister.

On its part, Ms. Siliya said the Zambian government has began providing a subsidy to livestock farmers for their pesticides in the same way it has provided for their crop counterparts. She noted that the mindset of livestock owners has always been that it was the responsibility of government to take care of their animals when they were threatened by disease.

“It is our desire to see this mindset change so that we switch it to that of business”, the agriculture Minister told a panel discussion called by the Global Forum for Food and Agriculture, GFFA, to discuss livestock sustainability held at the City Cube of Messe Berlin.

Ms. Siliya said the livestock industry in Zambia could flourish because there was a huge market in the southern and eastern African region with a combined population of about 500 to 600 million people, a point she made in an apparent response to constant linkages of the livestock market to Europe with its own standards for imports.

“While Zambia’s population is only about 15 million, we are in a region of over 600 million people with the potential to export in the region and have backward and forward linkages that come along with job creation”, said the Minister.

What Zambia needs, the Minister said was support in the area of research and development along with best practices. She noted that with the advent of technology, it should be possible to share knowledge around livestock management especially with rural areas at lower cost.

“We have done this with crop production where we have created an ecosystem using technology. We can replicate this at a country level, at a regional level and learn best practices from New Zealand as well as Europe”, said Ms. Siliya.

Effects of climate change that include unpredictability in rainfall patterns threaten the livestock sector in Zambia. In this regard, the Agriculture Minister noted that while Zambia experiences a lot of rainfall in January, it has not been the case this year. Consequently, pastures for animals will run dry threatening the health and survival of livestock. The Minister said government was taking a comprehensive approach to the challenge.

The Agriculture Minister reminded the panel that consisted of the EU, New Zealand, a Kenya-based Research center and the Food and Agricultural Organization and the audience of over 200 observers that Zambia and Africa as a whole were not major contributors to the forces that have led to climate change. However, Ms Siliya said, “we are willing to leverage our place in the international community so that as we participate and plan in advance for the impact of climate change using the funds that are available for climate change in the international community, we do so careful not to disadvantage our people”.

Currently, Zambia has 5 million heads of cattle smaller than Tanzania and Botswana, 190 million poultry and 1.3 million pigs. In terms of consumption, Zambians eat 12kigs of beef per year per person, 64 eggs per year and 19 liters of milk per year. From the perspective of sector organization, Zambia has 1.8 million households that on average own two cows per family. In terms of actual enterprises, for beef, the country only has seven of them.