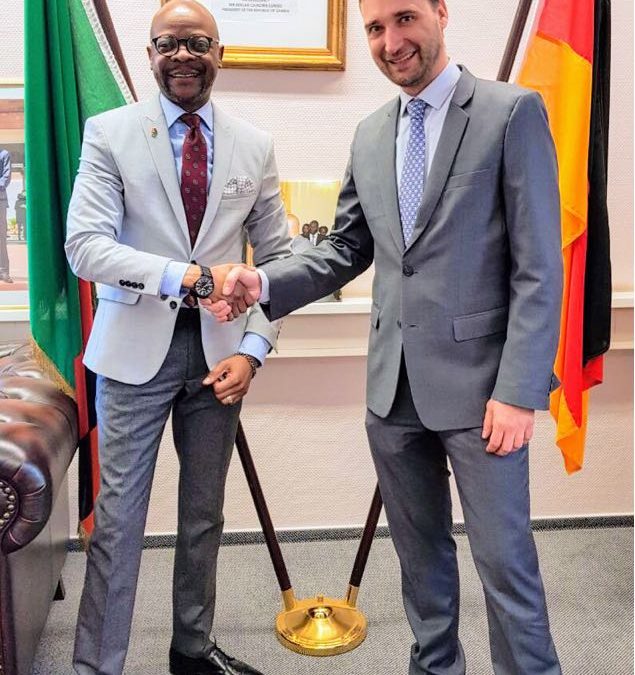 Zambia could see a huge rise in foreign direct investment or FDI from Poland, once it steps up the establishment of an agriculture tractor company called URSUS said honorary consul from Poland to Zambia Mr. Bartosz Brusikiewicz when he visited Ambassador Anthony Mukwita in Berlin.

“We cannot wait to see this project come to fruition because its success will mean more companies from Poland and more financing coming into Zambia to create wealth, jobs and cut poverty,” Consul Brusikiewicz said.

Ambassador Mukwita who, apart from Germany, is also accredited as Ambassador to Poland told the honorary consul that everything diplomatic is being done to step up the project.

“We have informed the Minister of Finance hon Margarete Mwanakatwe in a vital advice note that we need to bring the project back on track,” Ambassador Mukwita said further adding, “we have stated the urgency in our note to ensure the concessional finance line is not taken off the table.”

Mr. Mukwita said President Edgar Lungu had categorically emphasised the importance of a strong agriculture backbone for Zambia as part of the diversification programme.

This is according to a statement issued out of Berlin by First Secretary Press Mr. Kellys Kaunda.

Ambassador Mukwita said the URSUS tractor project worth about US$100 million was vital because of the following:

Honorary consul Brusikiewicz expressed concern that after signing the MoU, the project of URSUS agriculture had not taken off one year later despite the immense positives.

Ambassador Mukwita recently visited the Polish Ministry of Finance and URSUS tractor plant in Lublin located almost 200kms out of the capital, Warsaw to bring the project back on track.

Consul Bart, a highly respected businessman in Poland says the URSUS deal will open flood gates of investment in Zambia.