You are great diplomats 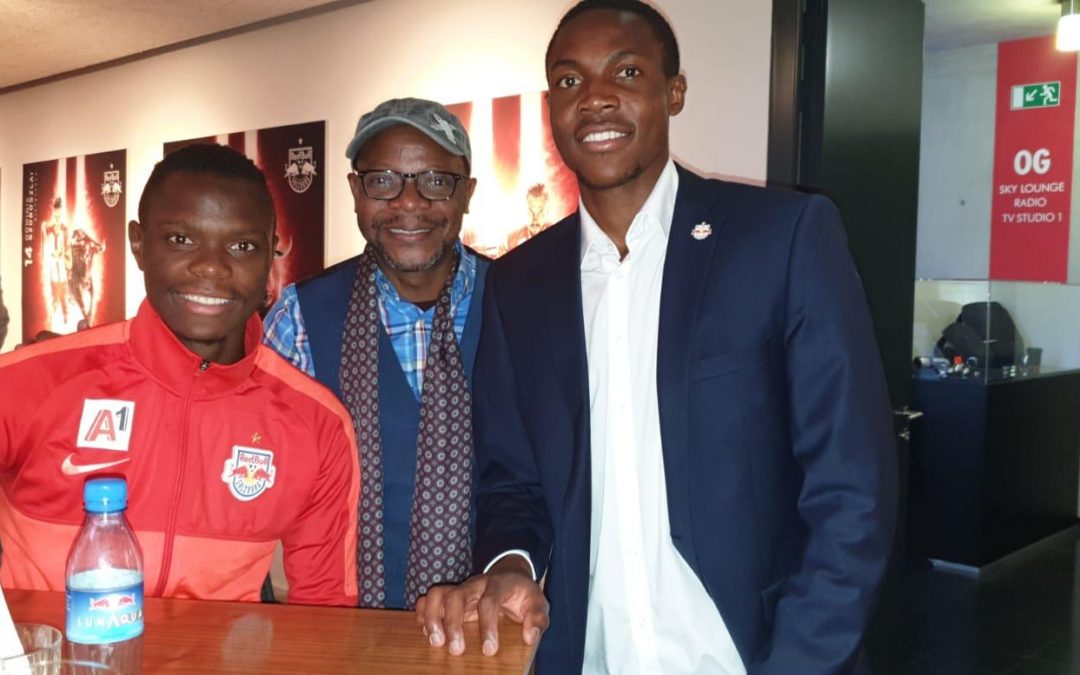 He told the 21year-old towering and prolific midfielder that because of their performance and their personal conduct in their private lives, Zambia has become a household name in Salzburg, one of the most important cities not only in Austria but Europe as a whole.

“You can see how adoring fans are looking at you as they repeatedly take their eyes off the pitch”, ambassador Mukwita proudly told Mwepu as he looked around from the middle role where he sat surrounded by thousands of cheering spectators.

He told him that President Edgar Lungu who occasionally took some time off his busy schedule to watch soccer would be proud of both Daka and Mwepu as they emphatically represented Zambia well and raised its flag high on foreign soil.

Ambassador Mukwita urged Mwepu to make better use of his time, his youthfulness, his top form and his earnings to plan for a better future ahead of him. He added to his counsel a phone call to Zambia’s soccer icon Kalusha Bwalya and passed the phone onto Mwepu.

After several minutes on the phone with Kalusha, fondly known as Great Kalu, Mwepu who was all smiles said it was the first time in his life that he had ever talked to Kalusha, a moment he said he regarded as a privilege as he and other young players always looked to Kalusha as their inspiration.

Mwepu assured Ambassador Mukwita that he was committed to his club, his career, his future and his family.

“As a career footballer, I have always admired Liverpool, and as fate would have it, my team is traveling to the United Kingdom in the next few days for an encounter with Liverpool”, he said with an obvious note of excitement in his tone.

On a private note, Mwepu told the Ambassador that he loves his family so much that the first thing he ever did was to buy a car each for both his mother and his father along with a house in Kitwe where they later moved from Chambeshi.

Concerned that some young players get carried away by indulging in relationships that sometimes ruin their careers, Ambassador Mukwita urged Mwepu to be cautious. In response, the young man assured the senior diplomat that he has remained faithful to his Zambian girlfriend currently pursuing public health at Rusangu University. Mwepu is currently studying entrepreneurial courses so that he appreciates the most effective way of managing his financial affairs.

Rebull Salzburg was Saturday playing Austria Wien on the former’s home turf. The visitors scored in less than ten minutes of the first half but Mwepu was unfazed assuring Ambassador Mukwita that his team was going to win the game adding, “we have never lost on home ground in over two years”.

Indeed Redbull Salzburg, one of the richest clubs in Austria, went on to shoot into their opponents’ net four times without any rebuttal until the whistle was finally blown to announce the end of the match with a four to one victory over the hapless visiting team.

Patson Daka only played 15 minutes of the game as he and his Zambian counterpart Mwepu had played on Wednesday and the coach wanted them to rest in preparation for the big encounter with Liverpool.

During his visit to the club, Ambassador Mukwita was introduced to senior management staff that included Stephan Reiter, the club CEO, Christopher Vivell, the club scout that identified Mwepu and the club physiotherapists.