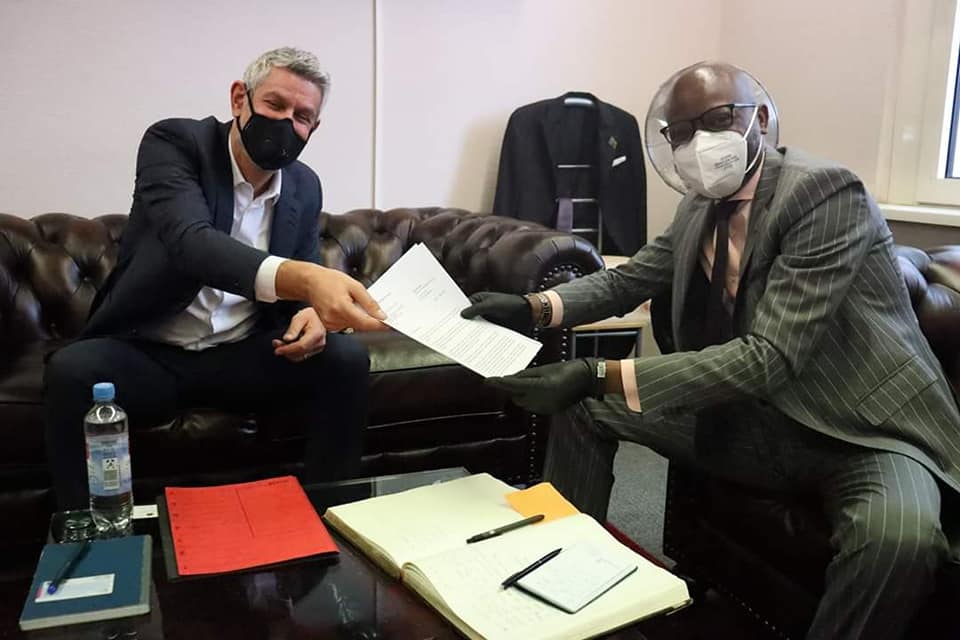 The in-coming Country Representative of German’s international development cooperation agency known by its acronym GIZ Mr. Helmut Hauschild has hailed the great relations Zambia and Germany have enjoyed over a period of more than 50 years.

Mr. Hauschild said this when he paid a courtesy call on Zambia’s Ambassador to Germany H.E Anthony Mukwita at the embassy on Axel Springer Str in Berlin this week.

Mr. Hauschild said GIZ was already cooperating with Zambian in the crucial area of revenue collection and reducing stunting by improving nutritional levels  especially in areas like Luapula, the poorest province in Zambia.

Other areas of cooperation include water and energy without which, Mr. Hauschild said the development of the country would be extremely difficult to undertake.

With support from the German cooperation provided through KfW, a German development bank, the Zambian government has been looking for qualified developers and investors with a track record in developing, financing, procuring, constructing and operating utility-scale solar PV for projects with an individual installed capacity of up to 20 Mwac for a total of up to 100MW which has now been increased to 120MW.

In his remarks, Ambassador Mukwita took the opportunity to convey Zambia’s gratitude to the German government and its people for their continued development cooperation. T

Ambassador Mukwita said in addition to the various programs GIZ and Germany in general continues to undertake in Zambia, the German government has always responded positively to call for assistance in critical times of need.

For instance, Mr. Mukwita said when President Edgar Lungu called for assistance in dealing with the sudden influx of refugees from the DRC not too long ago, Germany immediately responded by giving Zambia, through UNICEF, 10million euros that has now been used in proving water and sanitation not only to refugees but to surrounding host communities as well.

“Part of that money will go to assisting the vulnerable sections of our society through social cash transfer. This is one of the hardest hit members of our society who will need receive the much-needed relief”, Ambassador Mukwita noted.

Mr. Hauschild, an economist by training, has served in India for GIZ where he participated in providing technical assistance setting up that country’s social insurance systems. The father of one set of twins, a boy and a girl aged 15 says his spouse and children look forward with eagerness to begin their initial three-year tour of duty.

“My children love wildlife and animals and Zambia has plenty to offer in this respect, so we look forward to enjoying our stay in the country,” Mr. Hauschild, who is no stranger to Africa, his spouse being South African, said.

GIZ employs about 130 people full time, the majority of them are Zambian and it seats on annual budget on millions of kwachas in development aid for the country.

This is according to a statement issued by Kellys Kaunda, the First Secretary for Press and Public Relations at the embassy of Zambian in Berlin.