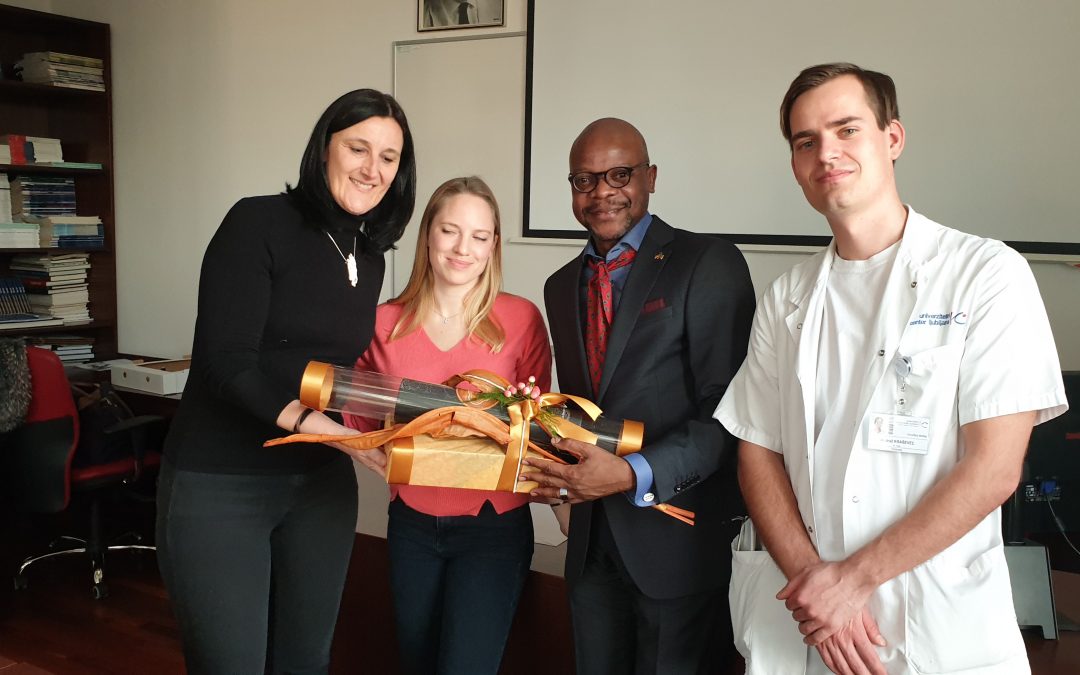 …as embassy is lauded for facilitating humanitarian aid

The head of the University of Ljubljana infectious faculty Dr Tatjana Zupanc is seeking greater formal cooperation between Zambia and Slovenia for interns and academic placements in order to benefit both countries as diplomatic relations grow.

Dr Zupanc was speaking during a meeting with the Ambassador of Zambia to Germany H.E Anthony Mukwita held at the medical faculty in the presence of the school’s specialist intern Professor Dr. Janez Tomaz and newly graduated Doctors that recently spent 90 days interning at the Nangoma Mission Hospital in Zambia.

“We have had informal relations with Zambia through our renowned missionary Father Stanko Rozman since 1990,” Dr Zupanc said, “through this relationship dozens of young doctors and even senior ones have gone to Nangoma but now we seek your help to formalise this relationship.”

Conversely, Professor Tomaz said nothing would give himself and the faculty more joy and gratitude than an exchange programme of medical academics and practitioners from Slovenia and Zambia swap places at universities and hospitals as soon as possible formally.

“We want you Ambassador to help us attract medical talent from Zambia’s hospitals to come and intern here in Slovenia and we want our Doctors to do the same in Zambia formally,” said Professor Tomaz.

Ambassador Mukwita said the two issues of formalising academic and medical placements was something positive that he believed could be done as President Edgar Lungu encourages greater global integration.

“The world is global now and there is a lot we can all learn from each other through official government channels as a matter of urgency,” said Ambassador Mukwita.

The embassy of Zambia commenced official relations with the Slovenian university in 2019 which led to graduating Doctors that were headed to their Sioma internship collect and donate various medical equipment for the mission hospital.

The embassy in Berlin then liaised with the First Lady Esther Lungu via her charity foundation, the Esther Lungu Foundation to transport the donation which included respirators to Nangoma Mission Hospital.

In the words of intern Doctors led by Dr. Klara Grad that just completed the 90 day stretch in Nangoma and now are back in Slovenia: “We are very grateful for the First Lady and the embassy of Zambia for the collaboration in getting the medical supply to Nangoma on time in good state. We are very thankful.”

Dr Grad said there is now three respirators for children as a result of the donation compared to only one before they got on the ground and the embassy and the First Lady deserved the plaudits.

“All the times collected reached the final destination, so we sincerely appreciate your selfless help and we appreciate,” the interns said in a letter they all signed.

Also for the first time in the meeting today was Dr Damjan Kozelj whose first stint in Zambia resulted into a one year none stop stretch and now she treks to Nangoma annually because she has developed a personal attachment to the hospital and people.

Dr Damjan wants to see how another area and province in Zambia can be developed in the way the missionaries and university students have done for Nangoma.

Ambassador Mukwita pledged to officially convey the message of gratitude to the First Lady from the university and Zambia’s honorary consul to Slovenia Damjan Zonta who has been instrumental in all engagements.

All this is happening on the side-lines of an annual reception President Borat Pohar holds for Ambassadors accredited to Slovenia such as Zambia that over sees Ljubljana from the Berlin station.

Ambassador Mukwita was accompanied by honorary consul Zonta and colleague Sasha Jalshovec at the university meeting.

In the past 30 years, cooperation between Zambia and Slovenia humanitarian wise has largely been informal despite deep rooted Christian relations background beyond diplomacy.

This is according to a statement issued by Kellys Kaunda, First Secretary Press and Public Relations at the embassy of Zambia in Berlin.