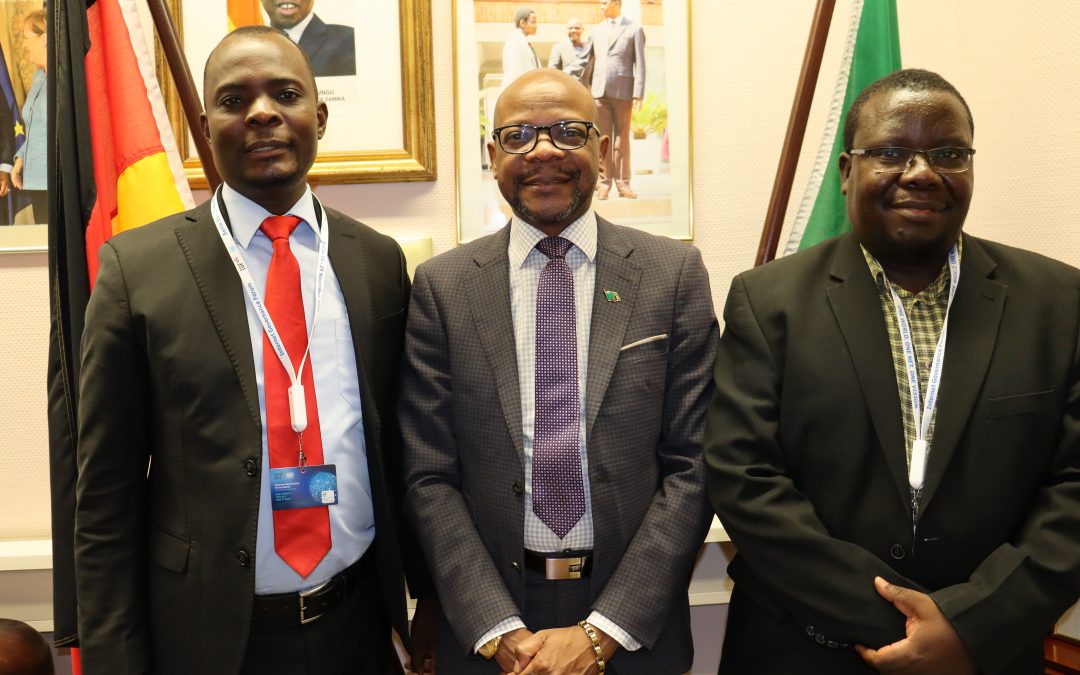 …says maybe time for Zambia to draw up web laws

The Legislator for Mwembeshi Constituency, Hon. Machila Jamba is among 140 Members of Parliament drawn from different parts of the world attending the week-long 14th Annual Meeting of the Internet Governance Forum, IGF, in the German capital, Berlin.

Speaking when he, in the company of a senior police officer Mr. Michael Ilishebo from the Zambia Police Force Headquarters visited Zambia’s Ambassador to Germany, His Excellency Mr. Anthony Mukwita, Mr. Jamba said lawmakers have been deliberating whether they need to pass laws to govern the Internet and if they do, what kind of laws should they be.

“In order to streamline their input, lawmakers have resolved to constitute a body among themselves that could serve as a point of contact with the IGF”, Mr. Jamba said.

He noted that the Internet has posed considerable challenges to governments around the world as the space has been used by different people for different reasons some of which have had devastating consequences for different countries.

Commenting on internet content, Mr. Ilishebo, a senior police officer said law enforcement agencies are grappling with the question of policing the internet as some information shared online is false, and sometimes defamatory.

Mr Ilishebo said while, some people may fear infringement of their freedom of expression through the legislation of the internet, a thought must be given to what would have happened if the Rwandan genocide of 1994 occurred under the current times of fast-moving information made possible by the world wide web.

“The discussion around law-enforcement and the internet is a legitimate one given the role information plays in influencing human behavior and how fast it moves today as compared to yesterday”, said Mr. Ilishebo.

In his remarks, Ambassador Mukwita said the government of President Edgar Lungu has embraced the Internet as evidenced by the Smart Zambia program that is rolling out internet-based public services throughout the country.

He said President Lungu recognizes the importance of the Internet in the provision of public information and access to public goods and services.

Under President Edgar Lungu, there has been considerable investment in the information and communication technologies that include the construction of communication towers in different parts of the country and a liberalized market for internet service providers.

Consequently, social media, among others, has flourished facilitating the enjoyment of freedom of expression as evidenced by the many platforms established by individuals, NGOs, private companies, public bodies and political parties.

In the west, countries are increasingly drawing up laws to regulate the internet and information that gets posted on the world wide web to ensure individual rights, national politics and national security are not breached.

Caption: Hon Machila, Officer Ilishebo when they visited Ambassador Anthony Mukwita at the embassy of Zambia in Berlin on the side lines of the internet conference.