2019 was a good economic diplomacy year for Zambia 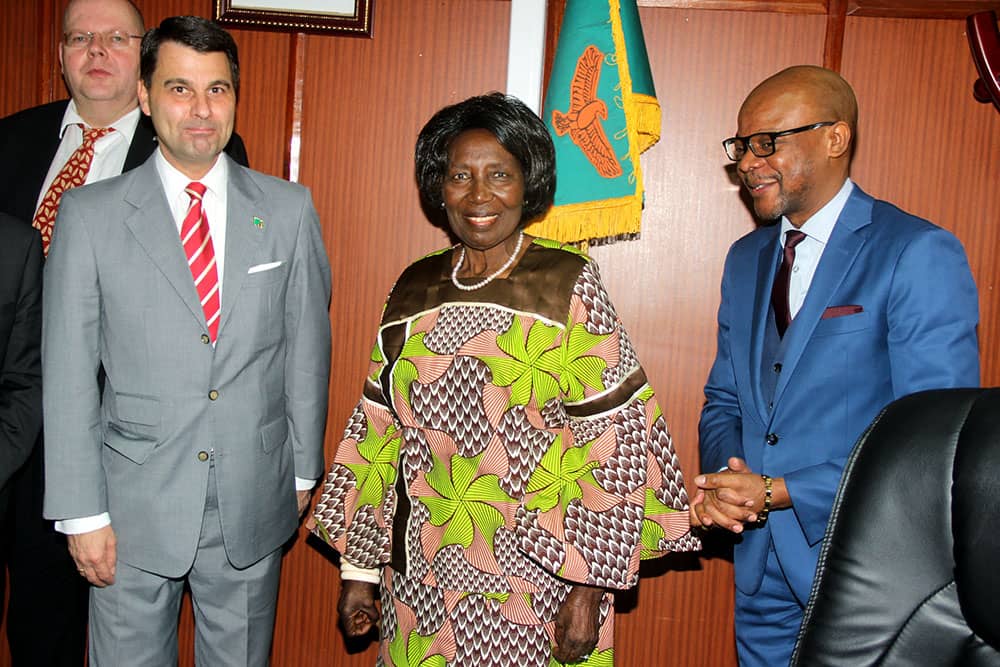 Zambia’s Ambassador to Germany, His Excellency Mr. Anthony Mukwita, has described 2019 as a good year for economic diplomacy.

Ambassador Mukwita said the Berlin Mission pursued and explored various economic opportunities that must eventually benefit the greater population of Zambia as well as improve already stellar relations with the host country, and others represented on a none residential basis.

“We pushed the envelope with the available resources to be in as many places in a bid to contribute to a better Zambia and narrow gaps between those that have and the ones that do not have,” said Ambassador Mukwita.

Ambassador Mukwita touted the Austria medical ‘spot on check’ on the children’s ward, the mothers ward and the Cancer Centre as probably the most important point of diplomacy of 2019 that occurred in July.

It is poised to lead to a reduced number of babies,  mothers dying at birth and delivery at UTH.

“We have since invited them to partner with Zambia, the second largest copper producer in Africa, that also produces cobalt and other minerals that are a prerequisite in the future of the auto industry, Electric Vehicles of EV’s,” said Ambassador Mukwita.

The idea is to interest BMW to partner with Zambia or Zambians to establish a component manufacturing plant in Zambia which is strategically and competitively located in the centre of eight countries, as the rich West and East frown upon fossil energised vehicles in preference for EVs.

“Zambia as copper and cobalt power house must emerge as a winner when the world goes EV and the time to do that is ripe now hence the reason we made the trip to BMW that currently builds 1000 cars per minute every day,” said Ambassador Mukwita.

In the bilateral relations sector, Ambassador Mukwita expressed satisfaction regarding a high-level  visit of the Austrian Ministry of Foreign Affairs delegation led by Dr Johannes Peterlik made to meet the second most powerful political leader in Zambia, Her Honor, the Vice President, Mrs Inonge Wina.

Possibilities of recalibrating diplomatic relations after the closure of the Austrian embassy in 1989 were candidly discussed.

“It was the first time such a high-level meeting was held between Zambia and Austria in 30 years, we hope something positive comes out of it given the strength Austria has in the area of health and renewable energy,” Ambassador Mukwita said.

Austria with a 500 billion-dollar GDP and only about 8 million people would be good for Zambia especially with a physical presence for increased economic diplomacy.

It was in 2019 that Slovenia, another country Ambassador Mukwita is accredited to on a non-residential basis started economic cooperation discussions with Zambia.

A business delegation from the 50 billion-dollar GDP Slovenia expressed interest in investing in the energy and information and communication technologies, ICT.

2019 was also the year Zambia saw a major change in the energy sector with the introduction of a creditworthy off taker, AFRICA GREENCO an initiative the Berlin Mission is proud to be associated with as it played a part in as its eventual fully-fledged functioning could lead to more excess to cheaper energy financing.

The Berlin Mission pursued humanitarian support in collaboration with the Honorary Consul in Austria, businessman Heinz Messinger who helped the embassy mobilize a 40foot container of assorted medical supplies that were donated to the First Lady Mrs Esther Lungu’s charity organisation that helps hundreds of vulnerable Zambians especially in rural areas.

In Poland, 22,000kgs of assorted medical equipment was also donated to Zambia by a variety of Polish organizations with the assistance of Honorary Consul Bartosz Brusikiewicz, destined for clinics and hospitals run by Polish missionaries.

The embassy also organised a sizable container from Slovenia that was donated a hospital in Mumbwa via the office of the charity the First Lady Mrs Esther Lungu runs.

The mission was happy to note in 2019 efforts to reduce the energy deficit by Germany working with Zambia at a cost of 100 million dollars under the GETFIT programme had escalated. This will lead to an additional 100MW of power that will improve the power situation in Zambia.

In sports, the Berlin Mission provided moral support to two Zambian professional football players Patson Daka and Enoch Mwepu who are playing in the Austrian premier league with Salzburg Redbull.

The Berlin Mission recognizes professional footballers as Zambia’s diplomats as they lift the Zambian flag in foreign lands which the country could leverage for economic diplomacy.

Looking ahead to 2020, Ambassador Mukwita said the Berlin Mission is expected to pursue more ‘economic impact’ activities that should result in long lasting positive effects.

Ambassador Mukwita said the undisrupted 55-year record of peace continues to be a huge investment attraction for Zambia, including the resolve and commitment of President Edgar Lungu, a pro poor President to do the right thing.

“We thank God for another good year of peace and stability despite the many challenges such as Climate Change and external economic shocks that we experienced, as did many other economies in Africa and beyond,” said Ambassador Mukwita.

The senior diplomat said through his international inter actions, he found that Zambia is constantly referred to as a top ten preferred investment destination in Africa.

“We have a great country (Zambia) with its own challenges and opportunities so its up to us to exploit the opportunities in 2020 and beyond,” Ambassador Mukwita.

The Ambassador said it is important in development to always look at the glass as half full because negativity adversely affects productivity, especially in economic diplomacy.

The above are great things that happened only on the watch of diplomacy of the embassy of Zambia in Berlin and do not include the other even greater things that occurred for Zambia elsewhere.