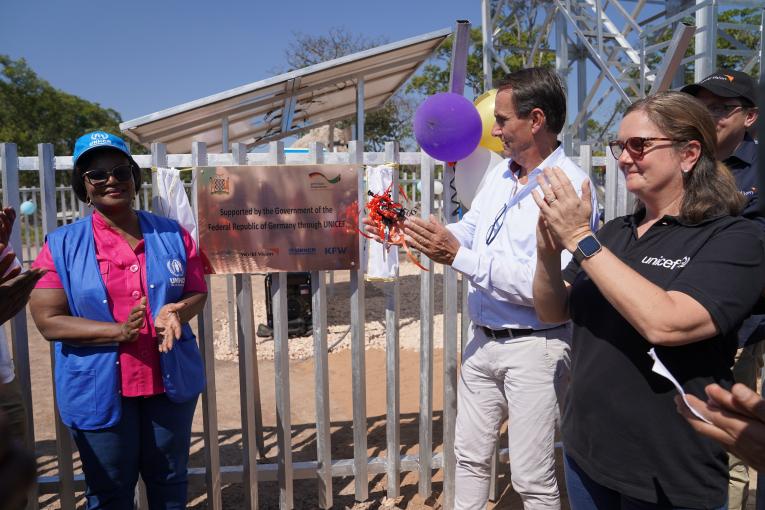 Scores of locals living near the refugee camps in northern Zambia near the border with the Democratic Republic of Congo (DRC) have become direct beneficiaries of a 10-million-euro water project sponsored by the Federal Republic of Germany said top government officials in Berlin when they visited Ambassador Anthony Mukwita recently.

The senior German officials, Mr Alois Schneider and colleague Ms. Heike Pörksen expressed happiness that thousands of people were benefiting from a project initially meant for a few refugees.

“We are happy that many Zambians within the vicinity are benefiting from clean water which means they are now less people that can fall sick from consuming unclean water,” Mr Schneider said.

Annually, a German team comprising officials from KFW meets with their Zambian counterparts at the Ministry of Finance in Lusaka that gives them an opportunity this year to meet for the first time, the new Minister of Finance Dr Bwalya Ngandu.

Ambassador Mukwita told Mr Schneider and Ms. Pokesein that they are likely to have a progressive meeting with Dr Ngandu, a former central bank deputy governor in charge of operations who has a solid background in the economic fraternity of Zambia.

The Zambian envoy observed that it was inspiring to read in June a statement by the Ambassador of Germany to Zambia H.E Achim Burkhart who said more than 100,000 Zambians and refugees would benefit from the 10-million-euro assistance via UNICEF.

Zambia and President Edgar Lungu have constantly received local and international plaudits for providing a home for refugees fleeing conflict in countries such as the DRC and Angola in the past.

President Lungu and the First Lady Mrs. Esther Lungu have openly drummed up support for refugees living in Zambia.

Mr Schneider and his colleague are expected to meet Dr Ngandu in Lusaka in two months’ time to discuss future cooperation between Zambia and the Bundesrepulik.