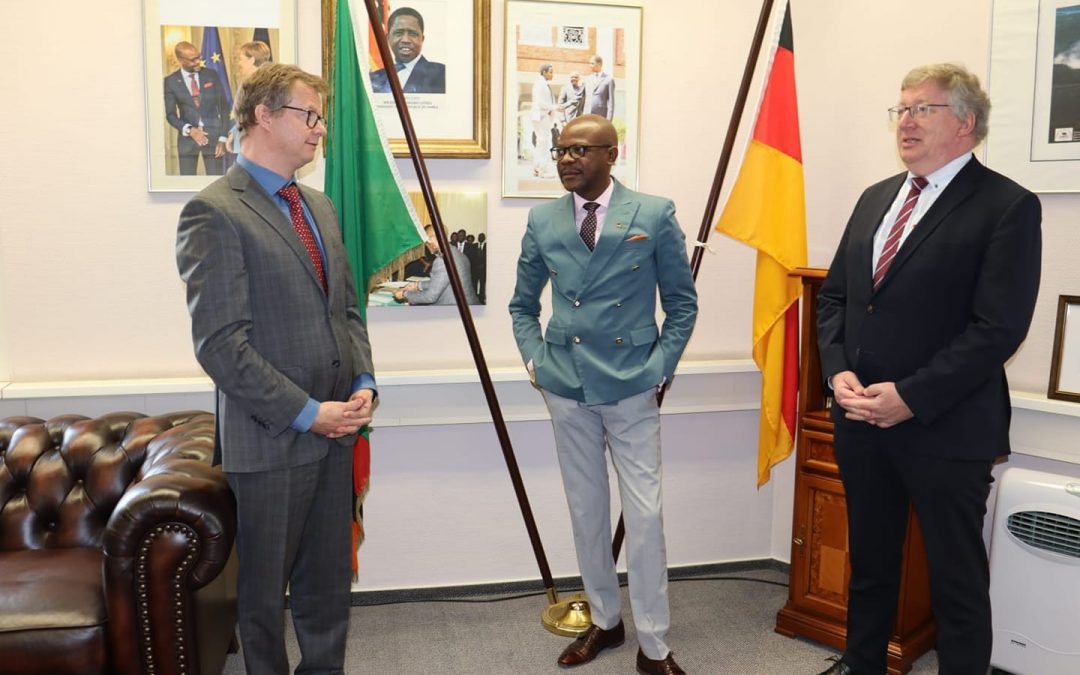 ….to grow the economy’ says Ambassador Mukwita
Berlin, 24.02.2021
Zambia’s Ambassador to Germany, His Excellency Mr. Anthony Mukwita says the country needs more local entrepreneurs in order to expand the indigenous private sector and expand the economy.
“The more local players we can get to oil the Zambian economic machinery the better for us,” said Ambassador Mukwita, “we should not rely on foreign investment alone but mix the two.”
Ambassador Mukwita says with an increase in the number of local entrepreneurs, the banking sector will see more savings and more liquidity available in the economy for further investment.
The Zambian envoy made the remarks when he met Mr Stefan Henkelmann and Markus Tacke of the German Association of Savings Banks known locally as the Sparkassenstiftung.
Mr. Henkelmann is responsible for the Africa region while Mr. Tacke is expected to arrive in Zambia on the 16th of March to take his new position as the regional director responsible for the organization’s projects in Zambia, Malawi and Namibia.
Sparkassenstiftung begun its work in Zambia when it joined and supported efforts by the Bank of Zambia when the Central Bank embarked on financial literacy, a concept through which participants learned the art of saving and investment.
Since then, the German-based organization has trained over a 100trainers who have gone on to train over 17000 participants who are involved in a variety of entrepreneurial activities.
“The training includes how to write a balance sheet; how to write a project proposal in a way that banks understand them and how to run a business profitably”, Mr. Henkelmann said.
Training has taken place in every one of the country’s ten provincial centers include some districts with plans for expansion to different districts underway.
Now Sparkassenstiftung will be coordinating its projects in both Malawi and Namibia from Zambia where regional offices have been established.
The regional office comes at a time when the government of President Edgar Lungu is seeking a rapid expansion of the economy by constructing the infrastructure necessary to support trade as well as local and foreign direct investment.
To encourage local entrepreneurship, the Lungu government has reformed the Citizen Economic Empowerment Commission, CEEC, which makes available to citizens loans to support local business ventures across a variety of sectors.
In addition, government continues to expand skills training centers and trade schools around the country to facilitate the development of local entrepreneurship.
Recently, government announced yet another initiative intended to encourage the growth of local entrepreneurship when it announced that 30% of contracts given for infrastructure development shall be offered to local people.
The organization’s decision to establish its regional headquarters in Zambia is a show of confidence of the stability of Zambia as a business base said Ambassador Mukwita.