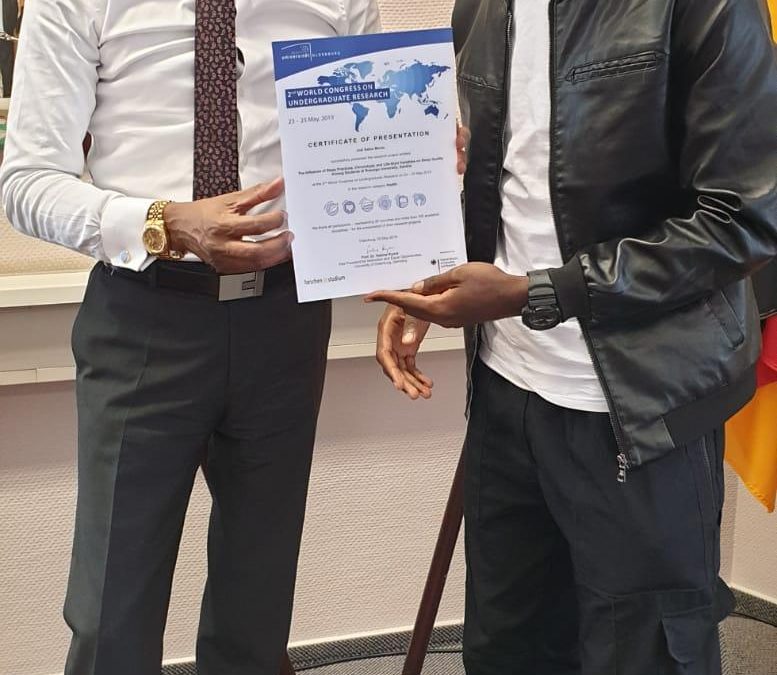 Zambia’s Ambassador to Germany, His Excellency Anthony Mukwita has saluted Joel Saboi Mvula, a young Zambian academic that participated in the prestigious 2nd World Congress on Undergraduate Research that took place recently at the University of Oldenburg, Germany.

Ambassador Mukwita described Mvula, who holds Bachelors` degrees in Psychology and English Language and Literature with Education, as an Ambassador in his own right.

“You were not just there at the congress as Joel but as a representative of Zambia. That is a huge achievement not only for you but for the country”, Ambassador Mukwita told Mvula when he called on him at the embassy.

Mr. Mukwita said President Edgar Lungu places a high premium on education especially for young people as he sees it as an “equalizer”. The Ambassador further said even the First Lady realizes this fact hence her decision to study.

“The First Lady could have stayed at home and enjoyed the trappings of State House but instead she is studying for a degree in addition to her crucial charity work. That’s how important education is”, the ambassador said.

The Zambian envoy noted that President Lungu often hosts young people at State House from various schools as part of his efforts to promote the importance of education.

“Because of education, you are able to travel to different parts of the world and address hundreds of people something you may not have achieved”, Ambassador Mukwita said.

The senior diplomat used the occasion to appeal to young people to embrace education as a “game changer” if they are to challenge the circumstances of their lives. He cited the example of President Lungu who hails from humble beginnings but holds the most coveted job in the country due to a sound education as an astute lawyer.

“Through education, he changed his circumstances and will now go down history as Zambia’s 6th President”, Mr. Mukwita observed. Noting that Joel is from Rusangu University, a new institution run by the Seventh-day Adventist Church, Ambassador Mukwita appealed to other privately-run schools to take a leaf from Rusangu saying, “this goes to show the quality of education the institution is offering”.

Mvula told Ambassador Mukwita that the chance to make an oral presentation of his research was richly rewarding and promises to open more doors for him.

“Next month, I am heading to the United States where I am participating in another researcher’s activity at Michigan State University”, Mvula said.

Out of thousands of entries that were submitted globally, only 250 research papers were accepted with fewer than ten from Africa. Mvula was the only one picked from Zambia and 1 out of 67 students that were sponsored by both the university and the German government.

The 2nd World Congress on Undergraduate Research was an interdisciplinary event open to all undergraduates globally to orally or by poster present research papers on some of the major themes representing current global challenges.

These include the environment, the economy, health, communication, innovation and politics. Mvula’s paper addressed sleep practices with a focus on students at Rusangu University. His study found that close to 80 percent of the students reported poor sleeping habits with only about 14 percent sleeping the recommended 7hours.

Experts have always warned against the adverse effects of poor sleeping habits that include the risk of dementia, low immune system, permanent damage to brain cells, diabetes, obesity, heart disease, heart attack, susceptibility to some cancers and in some cases death.

In recognition of the seriousness of sleep disorders, in June 1993, the US Congress established the National Center on Sleep Disorders Research. Over the years, there has been a flurry of activities in developing what is now generally referred to as sleep medicine as medical science has now accepted that there are diseases that arise from poor sleeping habits.

The embassy in Berlin has opened its doors not only to business people but also to ordinary Zambians that gain extraordinary achievements.